John Zylinski, a 65-year-old Polish Prince living in a marble mansion is Ealing is an Independent Mayoral candidate.  The property tycoon and an aristocrat entered politics only a year ago but his maverick personality and outspoken character is already earning him comparisons to Mayor Boris Johnson.

The 2016 London mayoral election will be held on 5 May 2016 to elect the Mayor of London, on the same day as the London Assembly election. The front runners for the Mayoral elections are Labour Party candidate Sadiq Khan and Conservative Candidate Zac Goldsmith. In addition, there are eight other candidates including those from Liberal Democrats, Green Party, UKIP, Britain First, BNP, Women’s Equality, CISTA, One Love (Ankit Love) and the Independent candidate Prince John Zylinski. 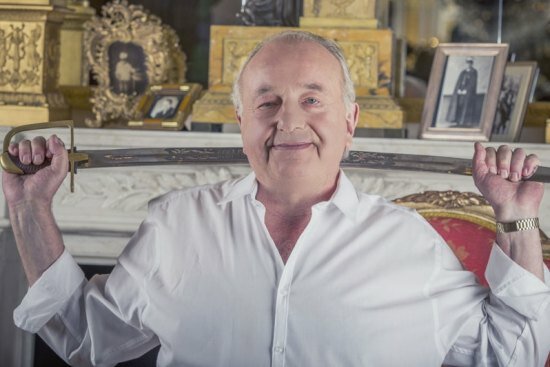 INB: What prompted you to stand for the 2016 Mayoral Elections?

Prince Zylinski: I fell in love with politics but none of the Mayoral candidates understand that politics is all about the people, the communities. I want to represent the minority communities in London as they are treated as second class citizens in London.

I am also running for the Mayoral election to bring some colour into the election. 2016 Mayoral Election is the most boring election ever. I have said before and I say it again, Zac Goldsmith is a Barbie and Sadiq Khan had a charisma bypass. I am the only charismatic candidate and neither of the two candidates have any credibility to take charge of London. I may not win the election but I certainly won’t lose it because of the huge amount of support I am receiving from minority community, especially the Polish community in London.

INB: So how big is the support from minority community for you?

Prince Zylinski: There are half a million Polish people in the city. And that’s just one community. On bank holiday Monday, I am having a rally and rock concert at Trafalgar Square starting at 1pm. Such things have never been done before and the event which will see hundreds of thousands of people is funded by Polish and other minority community businessmen in support of me.

INB: What is it that you can do that Sadiq Khan or Zac Goldsmith won’t be able to achieve?

Prince Zylinski: For starters, I am an independent candidate and that gives me a huge advantage. Take Sadiq Khan, for instance. He cannot represent his community because he is bound by Labour Party ideologies and has to stand by Labour policies. I don’t have to follow any party policies, I can make my own policies.

INB: What will you do if you became the Mayor of London?

Prince Zylinski: I have many things on my agenda. But three things on the top of my list are:

Prince Zylinski: Could you elaborate on these please? How will you achieve this?

I am a property businessman and I have a good network of property developers and I know it is feasible to build a million new homes in London with 200,000 of those being affordable homes. Housing crisis is a big issue in London and other Mayoral candidates do not have the ability to address the issue.

I want every street of London to have trees. This I will do by making it mandatory for anyone who applies for a planning permission to build a conservatory or extend their kitchen will have to pay the council £50 to plant a tree.

For cutting transport fares, it will cost £2 billion and I think this funding deficit should come from the central government. The central government should cut the funding for Scotland and direct those funds to London. But I know this can be tricky and if this fails, I’ll find other means to plug this £2 billion gap but I will not raise taxes.

INB: What other changes would like to bring about to the City as its Mayor?

INB: Do you think Mayor Boris Johnson hasn’t done enough for the minority communities in London?

Prince Zylinski: In the last 8 years, Boris hasn’t achieved anything significant. What has he done for Londoners? Given them bikes. That’s all.

INB: When you say you’ll work for the minority communities, do you mean just for the Polish?

Prince Zylinski: Oh no. I’ll represent every minority community including the Indian community. I have very close associations with Indian entrepreneurs in London. My house in Ealing, called White House London, is built with marbles sourced from Jaipur. I visit the Alperton temple frequently and have a lot of support from the Indian community in Wembley. Indians are good businessmen but Polish people in London are beginning to give them serious competition now.

INB: What do you make of the other candidates? Sadiq Khan also belongs to the minority community.

Prince Zylinski: Yes, he does but he is not capable of looking after his own community. He may be legally allowed to stand for Mayoral elections but morally he isn’t fit to stand for the election. He hasn’t come out and done or said anything around the Rotherham organised child sexual abuse that went on for years.

INB: Tell us a bit more about yourself and your political career.

Prince Zylinski: I am an aristocrat, from old Russian nobility, a businessman, one of the wealthiest Poles in Britain, leading figure in Polish and charity circles, art connoisseur, and now a Mayoral candidate.

I live in Ealing in a White House inspired palace built of Indian marble stones. I had promised my grandmother as a boy that I’ll re-build a palace, similar to the one she owned near Plock, which was burnt down after the war by the communists. The build took 7 years, used over 1000m3 different types of wood and 30 tonnes of marble. I live in it but allow the Palace to be used, free-of-charge, by many Foundations and Associations, I support - The Polish Culture Foundation, Alzheimers Foundation, Japanese Tsunami (Seven Beach Aid), The Knights of Malta, Children of Hope, and Kolbe House among others.

People took notice of me last year when I challenged Nigel Farage and was recognized as ‘the first person who has stood up in defense of the Poles in Britain’! In April 2015, I challenged Nigel Farage, leader of UKIP and self-declared opposer of immigrants to a duel of swords. As a result of a short film on Youtube regarding the challenge, I have gained huge popularity and received recognition in the public media. In my words “respect for Poles”, or “you have a right to vote, put yourself on the electoral role and vote” has not only mobilized a wider circle of Poles, but also Lithuanians, Hungarians and even the Asian communities in London.