Rang de to Mohe Gerua song from Dilwale continues to enchant fans all over the world not just for the magic the SRK-Kajol Jodi brings onscreen but also for the grand, stunning natural landscapes that amplify their romance. Now team Dilwale have released an endearing video of the making of Gerua song where SRK and Kajol walk us through the team's warmth, camaraderie, challenging weather conditions and hard work to bring the magical song onscreen and make it look effortless! 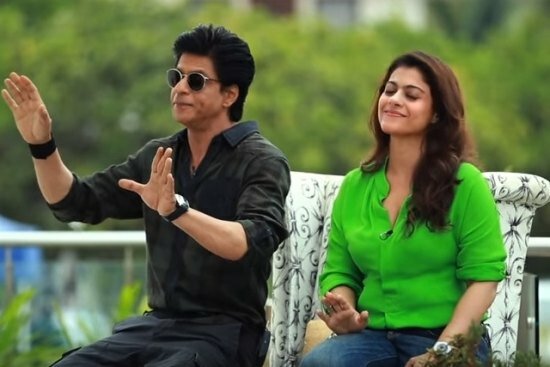 SRK-Kajol taking fans through the magical making of Gerua song

The video opens with Shah Rukh Khan and Kajol reminisce their all-time golden hits – Tujhe Dekha to Yeh Jaana Sanam; Suraj Hua Maddham etc. and then get into the groove for Rang De to Mohe Gerua.

The 7-minute video shows the hard work the full team of Gerua song has put in to make the song look effortless and chic and romantic. SRK and Kajol are joined by Rohit Shetty, Farah Khan, director's crew, drone-like cameras and extraordinary props such as an orange dupatta (Rang de tu Mohe Gerua means Colour me Orange).

The filming of the romantic song took place entirely in stunning Iceland which director Rohit Shetty calls "Mars" because of its extraordinary beauty. The song is picturized in the iconic black beach and the world-famous abandoned wrecked plane, and also on icebergs, behind waterfalls and on peaky mountain tops in freezing cold weather.

The video shows how the team battled the cold and stormy weather, climbed up mountains using just ropes and danced behind waterfalls when feeling soaked wet and wintry. The video also shows the fun and laughter the team shared together during the making of the song connoting their offscreen chemistry. The crew shared hot bhajjias and tea in the cold and shared warm overlays and jackets in between shoots to survive the challenging weather.