Chakravyuh is a ‘Bollywood political thriller’. Which is a shame, because the issue that Prakash Jha and his writer Anjum Rajabali address is among the most critical ones of our times––the rise of Naxal insurgency and its increasingly vocal and often violent clash with the establishment.

It is a fertile premise for a great story, but not for commercial cinema which demands simplification and entertainment regardless of plot considerations. 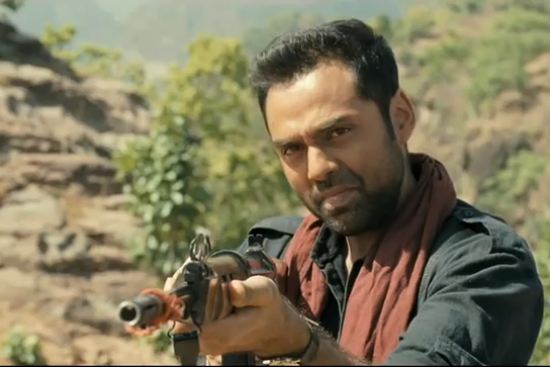 Chakravyuh follows the traditional narrative pattern of heroes and villains and applies it to a complex conundrum for which nobody has found feasible answers. Bits of it are reproductions of Jha’s earlier work, notably Gangaajal, which has an incorruptible SP charging at the local political class like a raging bull. Here, the cop, Adil Khan, is played by Arjun Rampal with sincerity compensating for deficiencies of acting prowess.

His best friend Kabir (Abhay Deol, fairly engaging) is a loose cannon with a fiery temper. But in Adil’s hour of need, Kabir steps in to infiltrate the Maoist ranks and help the police capture their wily leader Rajan (Manoj Bajpayee, the heart of any film he acts in). Their ideological head Govind Suryavanshi (Om Puri) is already in prison and refusing to co-operate with the police.

The set-up, predictable as it is, holds promise, with politicians and business tycoons (Kabir Bedi helming a company called Mahanta and no prizes for guessing what that name stands in for) at the throats demanding a quick resolution which suits their agenda.

One would have liked to see Kabir’s evolutionary graph from informant to insider. The screenplay encapsulates his transformation through scenes of blatant injustice and callousness even as the Naxal leadership stays steadfastly committed to the poor. There is a token bad apple (Murli Sharma) siphoning off funds from the money they extort for his ‘aiyyashi’. But there aren’t any ideological conflicts among the Maoists, nor any shades to those representing the establishment––it’s all too neatly laid out.

For Chakravyuh to work, the audience ought to have connected with at least one of the principal characters––both Kabir and Rajan hold potential. But being a firmly mainstream project (with loud background music, a horrible item song and a leading lady who has lost her way from the sets of Jannat 2), it cannot delve any deeper than stating how much of India’s wealth rests with its rich, how callous and corrupt the political class is, how easily the poor are crushed and how helpless the police and bureaucracy feels.

All of this is undoubtedly true. And Jha deserves credit merely for bringing this conflict centrestage. But compare it to Sudhir Mishra’s vastly superior Hazaaron Khawishen Aisi (also addressing Naxalism, but in an earlier generation) or even Govind Nihalani’s Hazaar Chaurasi Ki Maa, and you realise the difference is elementary––building the narrative through characters, rather than inserting them in a predetermined mould.