If Madhur Bhandarkar scavenges on the Page 3 circuit, Prakash Jha picks his themes from the day’s headlines. Sadly, he’s content projecting the bold print (or its screaming-ranting equivalents on prime time news), never showing the slightest inclination for introspection or analysis. 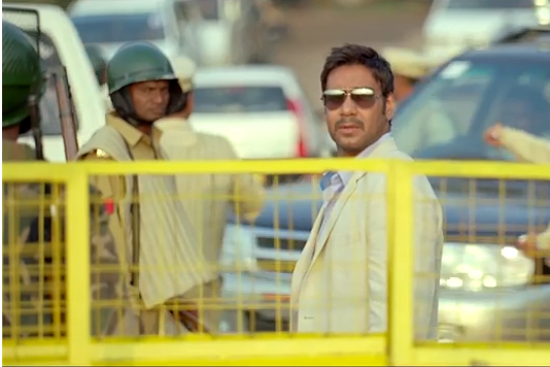 With four films in as many years, the quality of his output has progressively declined. By comparison to what followed, Raajneeti was a decently plotted political thriller. Aarakshan’s first hour wasn’t bad––at least it attempted a debate on reservation before jumping tracks to a blustering indictment of the commercialisation of education. In Chakravyuh you only got the sketchy outline of an ideological conflict through a simplistic good vs. evil narrative.

Satyagraha achieves none of the above. Its inspiration is the Anna Hazare-Arvind Kejriwal movement against corruption resulting in the formation of a new political party which hopes to make its mark in the forthcoming Delhi assembly elections. But Jha doesn’t treat the topic with any seriousness and is intellectually dishonest.

The in-film endorsements are even more shocking than Chennai Express because here’s a director who feigns righteousness and talks of corruption and social change while peddling everything from basmati rice to inner-wear (even as the Hazare stand-in is fasting unto death!).

Dwarka Anand (Amitabh Bachchan) a caricature idealist––he foams at the mouth because his son’s friend, Manav (Ajay Devgn), aspires to get a foreign education and become a millionaire or consumes alcohol––is apparently popular in the community for fighting various causes on behalf of the locals. There’s a token nod to Kejriwal’s fight against the Delhi Electricity Board.

But soon enough the son (Indraneil Sengupta), an honest government engineer, is bumped off in an accident. His wife (Amrita Rao) keeps doing the rounds of the district collector’s office to claim the compensation promised by the area’s MLA, Balram Singh (Manoj Bajpayee), playing the same role with different hairdos in successive Jha films) to no avail. So her father-in-law steps in, slaps the DM and lands in jail.

This is provocation enough for Manav to drop his roaring telecom business in Delhi and migrate to Ambikapur. Confused television reporter Yasmin (Kareena Kapoor) is close on his heels––she can’t decide whether to participate in the movement or cover it; her bosses don’t mind it either way. Arjun Rampal, playing more or less the same character he did in Raajneeti, is seen driving around in a jeep with a bunch of local thugs––he’s some sort of student leader/troublemaker who wants a stake in every crisis.

Meanwhile Balram is constantly arm-twisting the state government to get his way. So one fine day Dwarka (who has a handy mike and a loyal band of listeners at all times) announces his fight-to-the-finish against corruption, Manav renounces his corporate life paying all the money he’s earned by playing the system back to his shareholders and dons starched khadi silk jackets to become the leader of the revolution. It’s that simple. Like playing Monopoly or The Game of Life––you can shut down a huge business and alter the course of your life overnight without any repercussions.

But that’s acceptable. It’s just Bollywood’s style of over-simplification. What rankles is the tokenism. Like the impoverished woman who lectures Dwarka about how she can’t feed her kids while he talks of abstractions like corruption and justice, and later comes by pleading with him to break the fast. The comparisons to Gandhi are intentional if laughable (by the way, even the rock version of “Raghupati raghav” is outdated––it was first used by Karan Johar in Kuchh Kuchh Hota Hai to illustrate the younger generation’s lack of respect for tradition).

With an infuriating background score that keeps blaring "satyagraha, satyagraha" and a horrid sense of deja vu at every turn, it seems as though all parties involved have sleepwalked through the film Satyagraha.