English Vinglish Review -- Ignore the cliches of the Mind Your Language-type institute and try looking at life through a woman's eyes for a change. Sridevi's English Vinglish is refreshing, to say the least. 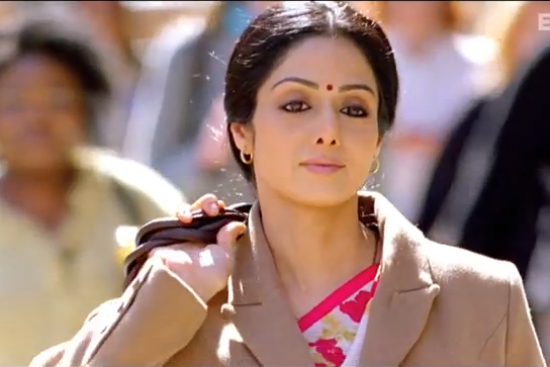 Sridevi from a still in English Vinglish
Image: YouTube (erosentertainment)

There are those who adore her without reservation and there are those who can't stand her (yes, they too exist). This writer's position is somewhere in between these two extremes. She is an entertaining actress in her best work––Mr. India, Lamhe, Chandni, Sadma, Chaalbaaz, in that order––and not the first South Indian to have thrived in Hindi cinema despite her thick accent, even though it hampers the complete acceptance of her as, say, Chandni from Shahjahanpur or Pallavi/Pooja from Rajasthan.

In Gauri Shinde's English Vinglish, she is Shashi Godbole, Maharashtrian housewife from Pune, and though the twang has reduced in the intervening 15 years (and the shape of her nose has altered beyond recognition), it hasn't totally disappeared. Some say it doesn't matter. But then again, in the objective assessment of a performance or even for mere enjoyment in the case of anal-retentive moviegoers like your's truly, authenticity does play a role.

Moreover, it isn't incongruous to spend so much time discussing language and accent in the context of a film which is, at least partly, about acceptance based on the knowledge (or lack thereof) of a particular language––in the film, the reason is the class snobbishness rampant in Indian society with people's worth being judged by their fluency in English.

On the other hand, Shashi Godbole is as authentic a middle-class Indian housewife as one has seen on screen. Closer in sensibility perhaps to my mother's generation than mine, she plays but a marginal role in the drama of her own life––primarily defining herself as wife and mother.

Her husband (Adil Hussain) is casually sexist and dismissive in the manner of many Indian husbands I've seen over the years––he doesn't even realise he's undermining her because she's too self-effacing to point it out, and he's consumed by his own sense of entitlement and superiority. Her teenage daughter probably takes her cues from the father and is embarrassed by a mother who may not speak English, but is enterprising enough to make laddoos and sell them for pocket money.

Tellingly, the husband thinks this is a downmarket occupation––another common perception that a woman's work isn't worthy enough without the ring of an impressive-sounding designation or a fat pay packet. Later in the film, Shashi brings up this anomaly. Her mother-in-law (Sulabha Deshpande), on the other hand, is warm and supportive (a very nice prick to the stereotype).

Now this woman must travel alone to America to help her sister prepare for her daughter's wedding and is blessed by the kindness of many good samaritans (and jolted by a few bad ones like the rude waitress in a cafe who summarily dismisses her because she can't place her order quick enough). She signs up for a quick-fix English speaking class and voila, plain Jane Shashi is ready to take on the world in her elegant cotton sarees.

Simple enough plot, nicely done. Watching it as a woman, there are moments that touch a deep chord––like the time Shashi feels guilty about putting herself before the family; not long after that authentic expression of parental angst and how easily kids can hurt their parents and be ungrateful. Or the stirrings of her heart for a man whose language she can't comprehend (Mehdi Nebbou, gorgeous and eminently loveable) but who speaks to her with feeling in his native French. "Her eyes are like two drops of coffee in a cloud of milk"––who wouldn't fall for a line like that?

But as Shashi tells her American-Indian niece (another one with inconsistent accent), "I am not looking for love, just some respect." Sridevi may flounder with her diction, but she never fails to convey the inner disquiet of her characters on her expressive face. And watching her, it's easy to accept that just a little bit of encouragement and validation can go a long way in restoring a woman's faith in herself––ultimately, the language skills are a secondary issue. Though one would have liked a few more moments of stillness, of lingering, particularly in the scenes featuring Sridevi and Nebbou.

Ignore the cliches of the Mind Your Language-type institute and try looking at life through a woman's eyes for a change. It's refreshing, to say the least.