Jaane Bhi Do Yaaro! remains a classic 30 years later because its insanity was directly proportional to Kundan Shah's anger with the system. Consistently absurd and relentlessly dark.

Today, in the age of big-studio productions, it’s nearly impossible to make an angry film; not unless you're totally bonkers (though Dibaker Banerjee came close with Shanghai last year). 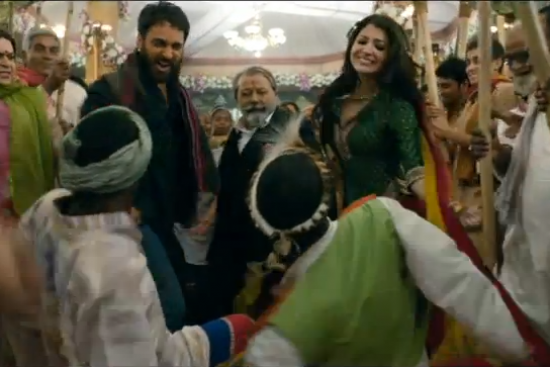 For instance, take the opening scene. Harry and his chauffeur Matru/Hukum Singh (Imran Khan, someday this boy/man will learn to act) are standing outside a boarded up liquor stall in the middle of lush fields, demanding they be served a crate of Gulabo, the local brew the millionaire zamindar so loves. First, they blow up the stall by ramming their stretch limousine into it; then, cut-to-flashback to talk to the stall-owner in a long, semi-coherent drag, and then back again to the smashed stall and the coveted crate of booze. The ingredients are right, but there’s a slip somewhere between the idea, the writing and the enactment, so that what should have been a moment of utter lunacy is just a self-conscious set-up.

The feeling continues for a while before Bharadwaj manages to establish his characters––Mandola the schizophrenic landlord alternating between being a Commie messiah to the poor while drunk and a ruthless tyrant when sober, Matru, who has a double life of his own, Bijlee (Anushka Sharma), Mandola’s crazy-with-a-soft-core daughter who occasionally goes swimming in the local pond alongside buffaloes as the whole village watches on (why was this scene necessary?), Choudhary Devi (Shabana Azmi) the wily chief minister playing everyone in sight, her dimwit son Baadal (Arya Babbar) determined to marry Bijlee, and a band of villagers desperate to save their land from Mandola-Deviji, led by a mysterious presence called ‘Mao’ who drops pamphlets from the sky.

A satire on contemporary India, Matru Ki Bijlee Ka Mandola underscores the schism between rural privation and urban glitz separated by but a few miles, and the resultant schizophrenic nation. Drunk, Mandola is the ghost of India in the heady post-independence years which embraced socialism and lay proud claim to being an agrarian state. But the next morning he’s a ruthless entrepreneur out to make as much money as he can and denying the peasants their rights. Ruthless Choudhary and her ineffectual, sycophant bureaucrats, perpetually hung-over and unable to even pee straight, are metaphors for the state of governance in contemporary India. Mao is an invisible presence that can only be effective through insubordinate means while the masses despair for succour, either from a heavenly hand or an inexplicable change of heart in the powers that be.

Sometimes the subversive tactics pay off––such as potshots at the middling scions of political families embodied in Baadal who isn’t merely foolish, but dangerous too. He is the kind who goes to Africa and ‘buys’ an entire village to bring back to his fiancée because she likes their music. The exposition is occasionally loony––peasants dunking Baadal and his cohorts with dung bombs is ingenious, so is a drunken spin on a small plane in the dead of the night that goes wrong in the most hilarious fashion.

But then the film and the director start taking themselves seriously and its core falls apart. At one point Mandola steps out of character to make an ironic declaration of his scary vision for modern India––reminiscent of a crucial scene in JBDY where Tarenja (Pankaj Kapur again) and Commissioner D’Mello (Satish Shah) are going up a lift at a construction site transacting a deal to add illegal floors to the building and shaking hands over champagne against the setting sun. The difference between these two scenes is, the one in JBDY is consistently funny even in its darkest moments, while Matru can’t keep that tempo going.

Still, to talk of Mao and a socialist revolution in these times is outrageous enough to be deemed an act of courage. Or quasi-insanity, which isn't half bad if you can cope with the intermittent sluggishness and genre volte-face towards the end.