Veteran filmmaker and Bollywood’s favourite romantic drama director Yash Chopra has died on Sunday, October 21 at the age of 80 after suffering multiple organ failure. His last film is Jab Tak Hai Jaan which is scheduled for a Diwali release. 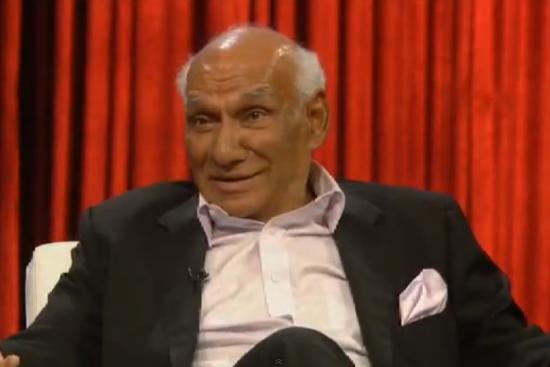 Yash Chopra was admitted to Mumbai's Lilavati Hospital a week ago after suffering from dengue fever but his death has taken the industry and fans by surprise as he was said to be better and soon to be discharged.

Yashji, as he is fondly remembered, had declared that the upcoming and one of the most ambitious film Jab Tak Hai Jaan would be his last and that he intends to retire from film making. "Mera dil jo kehta hai main wohi karta hoon aur mera dil kehta hai bas, bahut ho gaya," he said in an interview with Shah Rukh Khan announcing his retirement. Jab Tak Hai Jaan starring Yash Raj Films’ favourite actor Shah Rukh Khan alongside Katrina Kaif and Anushka Sharma is one of the most anticipated films of 2012.

Yashji’s film brought maximum fame to Bollywood superstars including Shah Rukh Khan, Sridevi, Kajol, and Rani Mukherji among others. Shah Rukh Khan particularly had a long association with Yashji and has worked with him most recently.

On Monday, October 22 a day after Yashji's demise, SRK broke his silence on Twitter in four tweets. He said: "Whenever my loved ones depart, I feel a part of me extinguishes itself with them. Will there come a day that I will no longer have a bit of myself to let go of?"

He added: "And then the thought follows that every time they have taken some of me with them onto theır last journey, I have found a fragment of them left inside me too...I will always have some love to give and I will always be both emptied and replenished by the loved ones I lose."

As soon as the news of Yashji’s death broke, Bollywood’s Shah Rukh Khan, Dilip Kumar and Anil Kapoor arrived at Lilavati Hospital to pay their tribute.

Yashji celebrated his 80th birthday as recently as September 27.

Yashji was born in 1932 in Lahore under British India to a Punjabi family. Although he opted to study engineering, his passion for film making brought him to Mumbai (then Bombay) to work as an assistant director in the late 50s. He has served as an assistant director for films such as Sadhna, Naya Daur and Ek Hi Raasta. He has also worked as a screenwriter for several Bollywood films.

Yashji’s Dilwale Dulhaniya Le Jayenge went on to become an all-time blockbuster and is the longest-running Indian film. The British Film Institute (BFI) ranked it as the 12th film in the list of top Indian films of all time.

The Bollywood fraternity took to Twitter to pay their respects for their favourite director.

Amitabh Bachchan said on Twitter: “I never ever thought there would come a day when I would have to say - " Yash Chopra no more " .. He went away too soon !!”

Meanwhile, Madhuri Dixit-Nene said: “Just got the news that Yashji passed on. He was one of the giants of cinema. My deepest condolences to his family. We will all miss him.”

Even Prime Minister Manmohan Singh paid tribute to the veteran filmmaker on Twitter calling him an icon of Indian Cinema, entertaining generations with his rare creativity.

Singh said: "He had an aesthetic talent to make his films look larger than life. His flourish to essay romance and social drama was unmatched."

"I send heartfelt condolences to the bereaved family and the entire film fraternity at this loss,” Simgh added.

Yashji’s last rites will be performed at Pawan Hans Crematorium in Juhu at 3pm IST on Monday. The body will be at Yash Raj Studios until then for Darshan. Amitabh Bachchan visited the studio and said: “Just back from his studio where he lies still and motionless ... this was the first time I ever saw him on his back in 44 yrs!!”