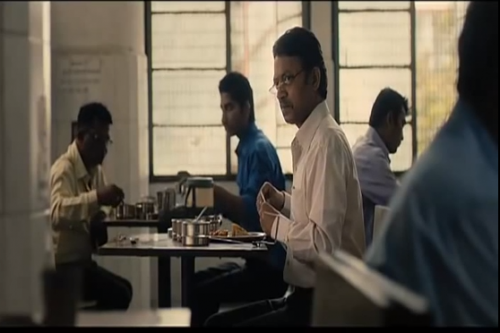 Irrfan Khan from a still in Dabba - The Lunchbox
Image: YouTube still

Everyone who's lived here long enough has experienced this life at some point, journeying on trains to work and back, eating cheap, unappetising food, getting lost in the crowd, feeling hopelessly lonely, yet not knowing what else to do but get up the next morning to the same crushing routine.

The manner in which Irrfan Khan plays Saajan Fernandes (curious name that, but it affords opportune use of a cheesy Nadeem-Shravan composition), a claims officer in an insurance firm of the kind designed to destroy souls, you can feel his misery trickling down to your bones; his large, desolate eyes conducting their own private communication with you every time he turns to the camera and says… nothing.

Without the crutches of dialogue or background music, Khan creates a living, throbbing protagonist who's heroic only because he trudges on even though there's absolutely nothing to look forward to. He's the guy who stands at the balcony and watches happy families dining together in their warm kitchens, the grouchy fellow who doesn't like kids playing in the street and can't be bothered with helping out a new recruit. We know Fernandes has a heart, but its been buried under the drudgery long before he went to the cemetery to book himself a standing grave––yes, this city has no space left for the dead either.

Ila (Nimrat Kaur) is another lost soul. Her time in a crummy flat with an uncaring husband and little daughter is filled with the monotony of cooking, washing, cleaning and retiring to her corner to wonder how her brother managed to end his life or her father is living with the horrors of lung cancer. Ila's sole companion is her upstairs neighbour (the voice of Bharati Achrekar), whom we never see in the film, and yet she comes alive discussing her comatose husband's fixation with the ceiling fan or the condiment that can fix Ila's cooking. The two women connect through a basket that ferries kitchen stuff from one flat to the other.

Ila's and Saajan's lives are destined to clash––such things are known to happen in large cities. In another kind of film when the yuppie hero collides with the heroine at a European railway station he flamboyantly summarises, "Bade bade sheheron mein aisi chhoti chhoti baatein hoti rehti hain," and our spirits are instantly lifted. In The Lunchbox, the payoff isn't instantaneous. The essence is in its sweet aftertaste, as you relish the myriad ways in which Saajan inhales the aroma of the dabba he accidentally starts getting from Ila, the charm of their occasionally philosophical but more often commonplace exchanges through chits, and the subtle transformation this secret correspondence orchestrates in both lives.

Nawazuddin Siddiqui as Saajan's replacement Sheikh (he's applied for early retirement, perhaps in the hope of tossing things around a bit) functions both as catalyst and comic relief. Watching Khan and Siddiqui together is a treat for sore eyes––two intelligent, intuitive actors involved in an ever-so-subtle game of one-upmanship. Kaur, on the other hand, has the stage to herself and she really takes us to the heart of this passionate woman who pours all her love into cooking. As Sheikh rightly observes, "Sir, aapke dabbe mein se kamaal ki khushboo aati hai."

Go on then, savour this feast.