Worse than senseless films are those with the germ of a great idea squandered in pursuit of easy gratification. Nupur Asthana's Bewakoofiyaan falls in this category. It picks up a topical theme and fails to make a halfway decent watch of it. 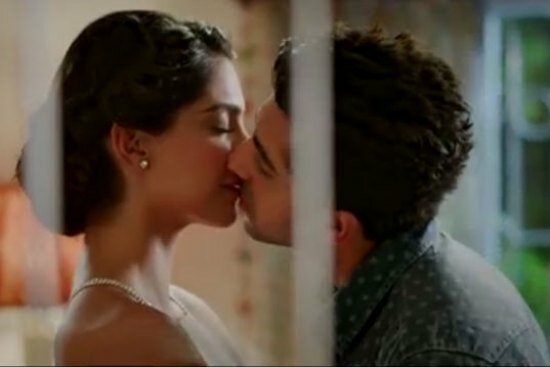 You'll see young people living aspirational lifestyles—branded clothes and accessories, lavish parties, fancy cars, foreign holidays and so on—sometimes beyond their means and often without putting aside for a rainy day. Habib Faisal's script pitches the two protagonists perfectly in this paradigm.

He, Mohit (Ayushman Khurrana) works for an airline company as a marketing executive and seems particularly cocky about his MBA degree, wearing it like a shield in the face of practical sense. She, Myrrah (Sonam Kapoor) is a banker whose life apparently depends upon buying new shoes and attending rock concerts. They profess undying love and the absence of any chemistry is only a function of poor casting—or maybe not. Anyway, both look suitably immature and made-for-each-other, at least in this regard.

Her father (Rishi Kapoor) is an honest government servant on the verge of retirement who for reasons not convincingly put forth, wishes that his daughter marry a rich man. One has seen enough such endearing but crabby old men in Hrishikesh Mukherjee's comedies to know that they're great to poke fun at and have their misconceptions busted. Kapoor definitely has the requisite ammo to pull it off. But the writer-director duo doesn't know how to pitch his idiosyncrasies or his transformation.

Much of the first quarter is spent on Myrrah coaxing Mohit to ask the father for her hand in marriage. Common sense suggests it should be a non-issue—she's an independent woman perfectly capable of doing her own talking, but heavy weather is made of this proposal business.

Then comes the matter of Mohit's unworthiness. Papa 'Osama' (as the prospective son-in-law refers to him) insists on using his highly placed contacts for a thorough background check on the boy and again, rather than put her foot down, the daughter encourages Mohit to lose squash games to the old man in order to make a favourable impression on him.

Till the boy actually loses his job and the plot finally takes off. Or doesn't. One can conjure several possible scenarios for such a crisis. The worst of which is what happens: the couple continues partying with a vengeance, he lives off her for a while keeping Papa in the dark and pretending to be gainfully employed, they have a few petty arguments before breaking up.

Again it's not implausible—perhaps young people do live in a bubble and are ill equipped to cope with real problems. This may well be the film's central argument. But by failing to develop an engaging narrative or agreeable characters it just seems like a waste of time and money. Theirs and ours.