Some of us have waited decades to see Farooq Sheikh play the lead in a film. Just to hear the man say, "I love you" to his longtime screen companion Deepti Naval is well worth the price of a ticket for Listen Amaya.

Why? Because when he speaks, the feeling surges to the surface effortlessly and transcends the stage-y atmosphere of this film. 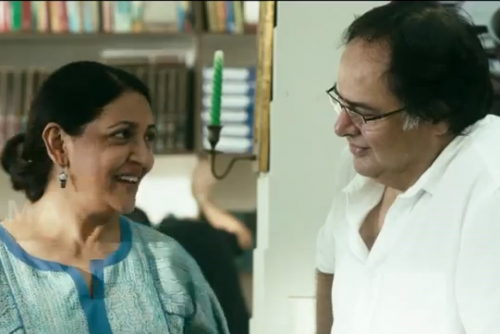 The hallmark of a great actor is that he can convince you about anything and infuse his character with layers, sometimes beyond the pale of the screenplay. That he is a guilt-ridden father and husband still unable to cope with the accidental death of his family. That he, Jayant, and Leela the widow whose cafe he frequents, have an easy friendship which seamlessly transforms into love. That he adores Leela's daughter Amaya (Swara Bhaskar) but also understands her inability to accept his feelings for her mother. That he's running out of time but refuses to force his hand.

Sheikh conveys all this and more. And Naval portrays a mother who can't separate her own needs and desire for happiness from her daughter's. Even if she's anguished by the otherwise modern girl's pig-headed opposition and defiant self-absorption. Her loneliness isn't expressed in a background song or reams of dialogue, but through her body language, her silences and her kindly smile. The mother-daughter relationship has a lived-in quality that is so rare in Hindi cinema.

Swara Bhaskar has a tough part to execute. Not because it's hard to imagine a free-spirited young woman suddenly turning annoyingly conservative about her mother's love for a man other than her father and behaving like a petulant child, but because writer-director Avinash Kumar Singh can't translate the nuances of his script on screen. This is particularly evident in the unspoken dialogue between mother and daughter. Not for something lacking in the performances, but the artificiality of the framing ruins it.

The rest of the film, its pretty but fake setting, the FabIndia catalogue furniture and half-baked characters, the cozy café and the contrived sequences of engagement with people outside of the central trio are inconveniences one must put up with before the narrative finally takes off in the second half. It's a pity because there is a thought to it––the idea of memory and forgetting is woven into different strands which come together quite well. But the pacing is so slow, particularly the first hour seems scattered all over Leela's home and cafe.

A few years ago, Pyaar Mein Twist, an utterly mediocre film about a sunset romance, was rescued by the easy chemistry between Rishi Kapoor and Dimple Kapadia.

Listen Amaya has a much warmer core, yet its likeability hinges largely on the lead pair’s dignity and warmth. But hey, I am not complaining. Bring them back for an encore!