For a film that keeps reiterating, "Don't underestimate the common man," Chennai Express does precisely that -- displaying unqualified disdain for the audience's capacity to discriminate between intelligent, self-referencing and lazy writing. 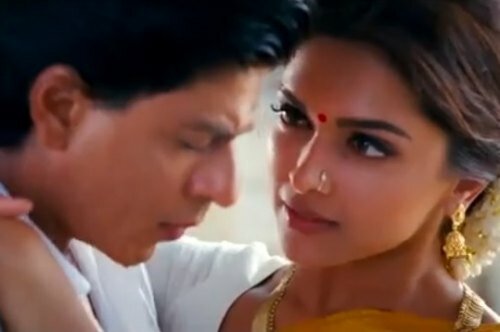 Shah Rukh Khan claims he's 40 and Deepika Padukone chides him suggesting he looks 50, but what he's really saying is, "I'm still the loveable, cognac-eyed, dimpled brat of Dilwale Dulhania Le Jayenge and am going to show you how little I've evolved over the last two decades."

Padukone gets top billing (and she deserves it) but her Meenamma is every bit the good Indian girl who won't sleep on the same bed with the hero till they're married, take sindoor in maang very, very seriously and whose father will twist her wrist the old-fashioned way till the hero spills blood and wipes out the competition to take home his dulhania with full family honours––never mind if the father, a local warlord, isn't deserving of the honour.

SRK tries to do an Aamir Khan by lecturing his prospective in-law about how to treat women and asserts, "It's nice to be important, but it's more important to be nice." Here I was merely expecting him to sing "I'm the best" and get done with it.

Considering the kind of money that must have gone into making (and promoting) Chennai Express, its visual effects are the tackiest one has seen since Veeru Devgan's Hindustan Ki Kasam. Perhaps Rohit Shetty and Co. thought that since the film is set in La-la land anyway, who cares about production qualities? Didn't we throw in two item songs?

Shetty has upstaged Ramgopal Varma by casting the ugliest ensemble of extras in a single film. Also for the first time in Hindi cinema's rich history of in-film placements, a star has performed an ad for a brand he endorses on screen through the narrative, and even announced its price (twice) in case viewers wanted to rush straight from the movie hall to acquire it.

You could play spot the reference and pass the time when things got tedious––which was much of the 140 minutes running time, barring a few laughs in the first half––chiefly DDLJ (the entire climax, but several other minor scenes too) and Singham (minus its underlying thematic righteousness), plus badly sung versions of old SRK numbers.

In days to come, figures will fly fast and furious with fans mindlessly flocking to the theatre and emerging zombie-like, spouting inanities about the film's 'time-pass' value.

SRK and Shetty will proclaim that petty critics don't understand cinema and are merely jealous of their success before flying off into the sunset towards IIFA where SRK will play host, dance to hit numbers from Chennai Express and win several awards, while Shetty will plan the next two sequels to Chennai Express, alongside Golmaal 4 and Singham 2. Filmfare will institute a new award in his honour for the most number of 100-crore hits; naturally, he'll be its first recipient and will receive it from (who else) SRK!