“Landing at Heathrow. This city does talk to me. İ feel all wanted here and the books that I can buy! Yay!!” the actor said.

SRK on the plane just before landing at Heathrow to promote Chennai Express
Image: Twitter (iamsrk)

The actor in his upbeat mood said on Twitter earlier: “London calling...what a lovely plane I am in...shower and lounge. I get very excited by these small things... not that I will use either,” he said.

SRK landed in a drizzly and muggy London this morning [July 30] but the lack of sunshine or the wet, damp London hasn’t dampened the actor’s spirits.

“Water is an eternal lover for one reason: It knows nothing about failure,” said the actor about the London rains rather philosophically.

Until now, King Khan SRK has been busy promoting Rohit Shetty’s upcoming action comedy flick Chennai Express in Indian cities with Padukone. But now he is set to woo the huge Bollywood audience in the UK. 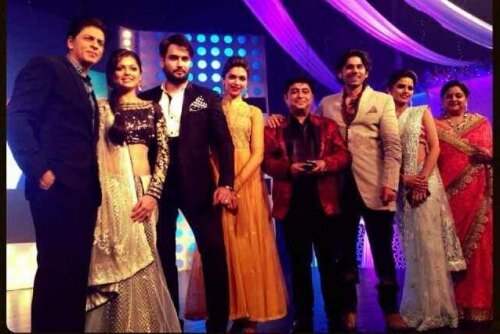 SRK and Deepika Padukone in Mumbai on the sets of television show Madhubala
Image: Twitter (iamsrk)

Ahead of his London trip, the actor promoted the upcoming film with Padukone on the sets of popular television show Madhubala in Mumbai. Both the actors danced with the Madhubala cast and crew. “Sweated too much on the sets...but was fun with the whole cast,” he said. On the sets of Madhubala, SRK was looking dapper in a black suit while Deepika Padukone dazzled like "Madhubala" in a yellow and gold anarkali suit complete with traditional jhumkis.

Rohit Shetty’s Chennai Express is slated for a 2013 Eid release – Thursday August 8 and recreates the magic of super-hit pair of Shah Rukh Khan and Deepika Padukone who were seen together first in blockbuster Om Shanti Om.

The trailer of the film, released on YouTube in June received more than 600,000 views in 24 hours of its launch.

Catch up on Chennai Express trailer and pics: SRK-Deepika Padukone onboard