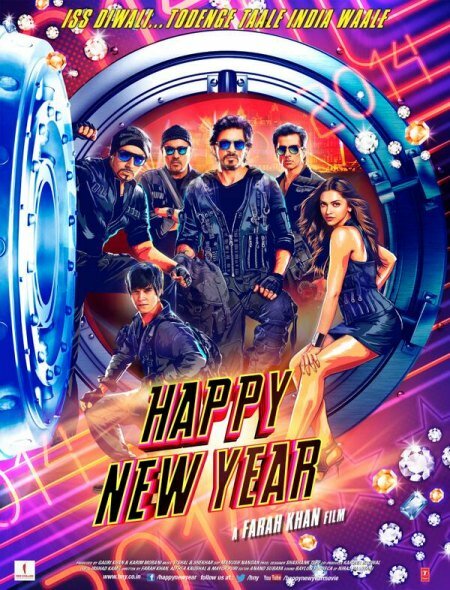 The film’s first look was launched on January 2, 2014. The first poster of the film shows the star-cast in all-black ensembles. The first look suggests that the film could be about heist.

Happy New Year, which has been in the pipeline since 2005, is finally underway in 2014 and the team is using the social media to create a buzz around it.

“Brand new schedule starts today of “Happy New Year” [film]… As usual, woke up half an hour before the alarm in excitement and nervousness… Wish us luck guys,” director Farah Khan said on Twitter adding “I love the buzz pre shoot... costume trials on 6th floor, dance rehearsals on 1st, edit on 5th! The office is a bee-hive!

Its Twitter handle gathered over 20,000 followers and Facebook page received over 40,000 likes. The film’s campaign involved tweeting to followers a digitally signed personal poster by the stars.

The Happy New Year team took to Twitter to communicate with each other too. “Shooting for Happy New Year in Kamalistan Studious,” said Abhishek Bachchan. While Boman Irani tweeted: “Dear Farah Khan jee. Ready with full makeup waiting for the director to arrive on set. Any idea?" to which the director replied: “I'm ON set since 2pm! come out!”

Happy New Year team’s use of social media demonstrates the growing importance of these channels to engage with Bollywood fans.

The action-comedy masala film will be the third collaboration between Farah Khan and Shah Rukh Khan who worked together previously in Main Hoon Na and Om Shanti Om. Meanwhile, it will be Farah’s second project with Deepika Padukone.