India’s most popular cars including Suzuki-Maruti Alto 800, Tata Nano, Ford Figo, Hyundai i10 and Volkswagen Polo are 20 years behind the safety standards seen in Europe and North America. 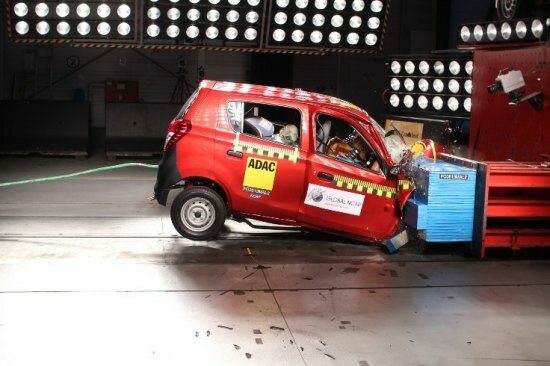 The car crash tests conducted by a UK organisation on these vehicles revealed that they posed high-risk of life threatening injuries in road crashes.

All the cars examined received zero-star ratings in adult protection when their frontal impact at 64km-per-hour were tested. None of the entry-level versions of each of these five car brands were fitted with air bags as standard, the test revealed.

This was termed “worrying” because combined sales of these five cars accounted for around 20% of all the new cars sold in India last year.

The results highlight major differences in the structural integrity of the vehicles tested, according to Global NCAP.

“India is now a major global market and production centre for small cars, so it’s worrying to see levels of safety that are 20 years behind the five-star standards now common in Europe and North America,” warned Max Mosley, chairman of Global NCAP.

“Poor structural integrity and the absence of airbags are putting the lives of Indian consumers at risk. They have a right to know how safe their vehicles are and to expect the same basic levels of safety as standard as customers in other part of the world,” Mosley added.

The test found that vehicle structures were inadequate specifically in Suzuki-Maruti Alto 800 – the best-selling car in India and the Tata Nano and the Hyundai i10, other popular brands. The crash tests found that the structures of these vehicles were such that even fitting airbags would not be effective in reducing the risk of serious injury.

Comparatively, the structures of Ford Figo and Volkswagen Polo were more stable during the tests and would be able to provide protection for the driver and the front passenger when fitted with airbags, the UK organisation concluded.

The NCAP test results come at a time when Volkswagen said it is withdrawing the non-airbag version of the Polo from sale in India. Global NCAP then tested another version of Polo with two airbags fitted as standard and gave the model a four-star rating for protection

India would benefit enormously from the introduction of minimum crash safety standards and clearer information for consumers about the protection new cars offer, according to India’s Institute of Road Traffic Education (IRTE).

“Many cars made in India for export meet these standards already, so it’s not a question of know-how or capability: India’s automobile industry just needs the right incentives,” said IRTE president Rohit Baluja.

UN’s Decade of Action for Road Safety recommendations are not yet applied in India. With its introduction, India can produce cars that are “every bit as good as those in Europe and the US”, said Baluja.