Home » Movies » Bollywood » Mastani in a Saree! 8 Photos of Deepika Padukone's saree appearances in 2015!
Deepika Padukone looks sensational in any outfit but the actress rocked saree look like never before in 2015

Mastani in a Saree! 8 Photos of Deepika Padukone's saree appearances in 2015!

A traditional saree is a quintessential Indian attire which enhances women's beauty and elegance and Deepika Padukone shows how to wow in a saree like no one else! MS Padukone made several saree-clad appearances this year - from promoting Piku to Tamasha to Bajirao Mastani. Here are eight pictures of Deepika Padukone's saree look in 2015. 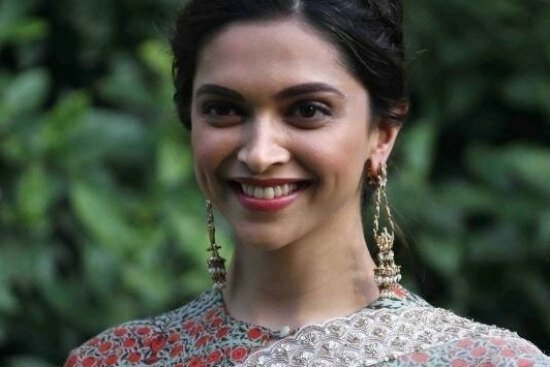 The Bajirao Mastani actor is known for her versatility not just in playing different characters onscreen but also for trying out different looks – fusion, traditional Indian, western and even shabby chic. But the actress mesmerized her fans best in her saree-clad appearances throughout 2015.

It all started in January when Deepika looked ravishing in a black saree with swan print, traditional jhumkas and a black bindi to collect her Screen award for Best Actor – Popular choice. 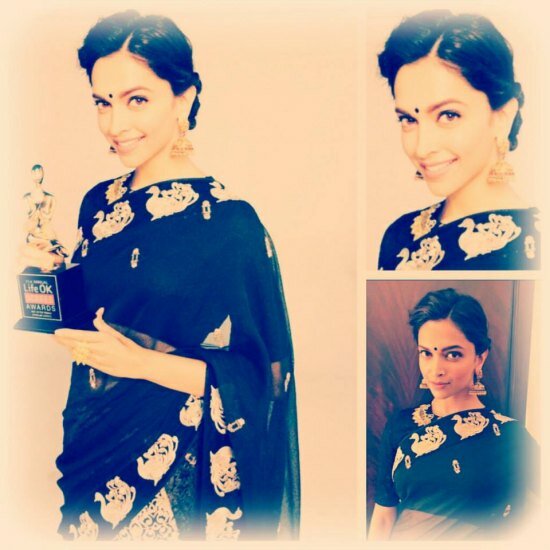 Later in 2015 just ahead of super-hit film Piku's release, the actress made several appearances in a saree. Deepika bought back vintage style back in fashion when she wore a bubbly green saree with bold flower prints and bouffant chic hairdo for promoting her film Piku. 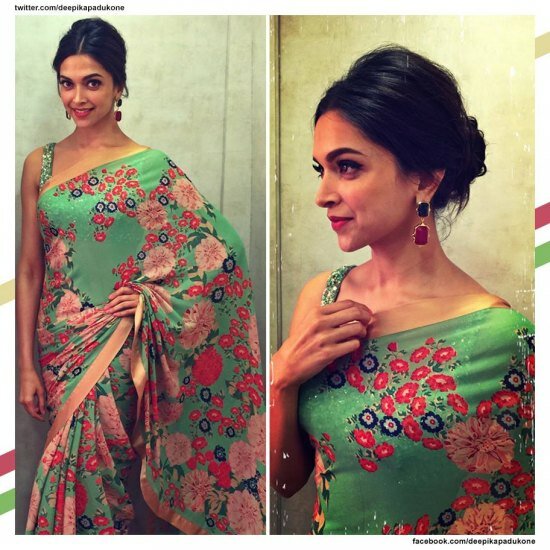 In another Piku promotions appearance, the actress looked ethereal in a sheer saree and printed blouse while appearing on the popular Comedy Nights with Kapil chat show.

By mid-2015, the buzz and hype around upcoming Bajirao Mastani reached fever-pitch. Deepika, in tune with her character Mastani, rocked several saree looks in her public appearances related to Bajirao Mastani.  She looked sensational in a baby pink-baby blue combination embellished saree and amrapaali ear-rings to promote Bajirao Mastani in Jaipur. 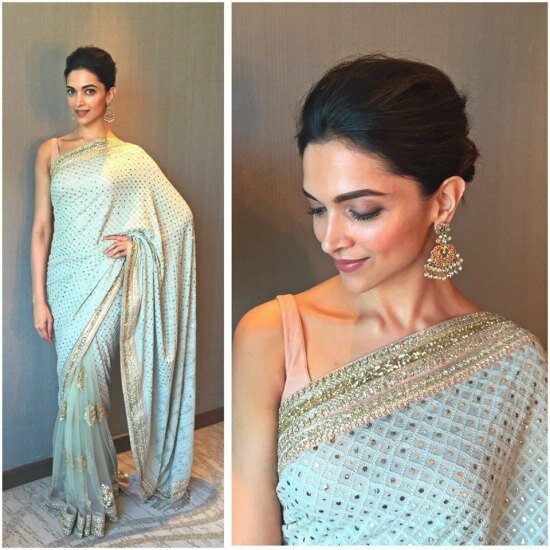 Deepika walked the red carpet at IIFA 2015 like a real diva in a glittery red saree where she was honoured with the Woman of the Year award. 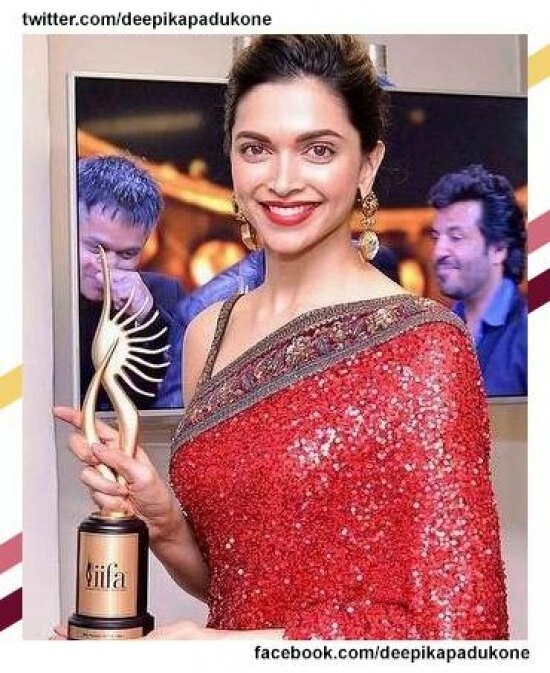 Deepika celebrated Diwali 2015 with her Tamasha co-star Ranbir Kapoor and was looking festive in a cream saree with red embroidery and smoky-eye makeup. 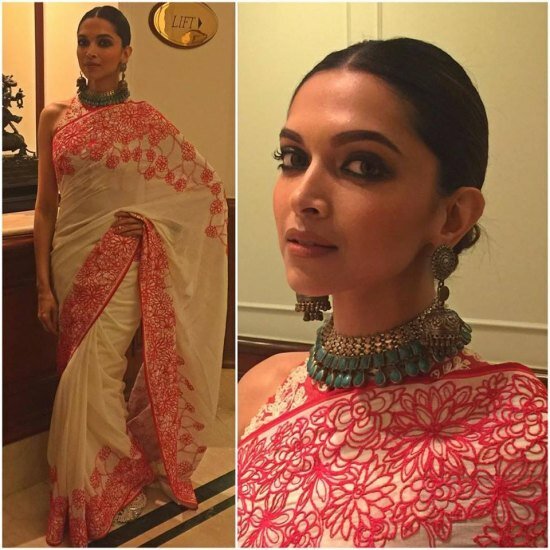 In the last 2 consecutive days, just 10 days ahead of Bajirao Mastani release, Deepika Padukone is continuing to look regal in sarees. In an appearance with her Bajirao co-star and rumoured boyfriend Ranveer Singh, Deepika wore a printed long-sleeved blouse and teamed it with a subtle sheer saree 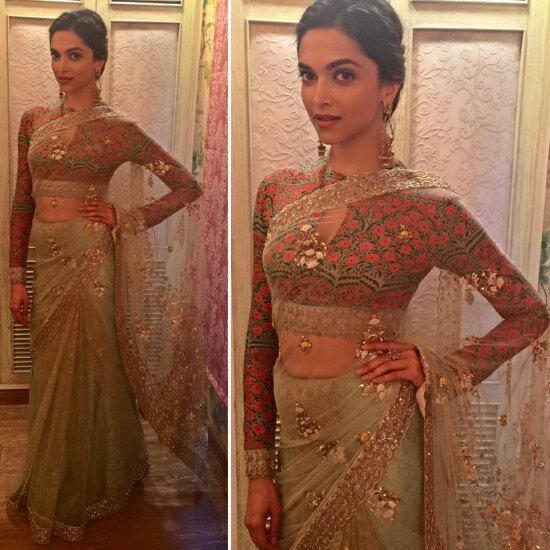 The actress continued her saree crusade by sporting a black printed saree for a modern, enigmatic look. 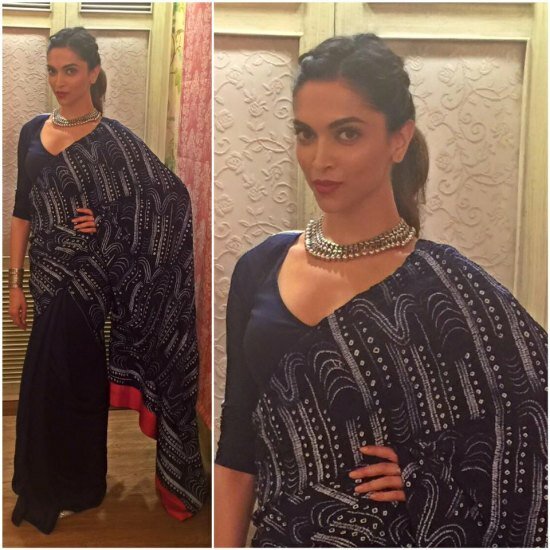 We look forward to seeing Deepika Padukone in many more saree avatars as Bajirao Mastani promotions heat up. Keep watching this space for more pics!