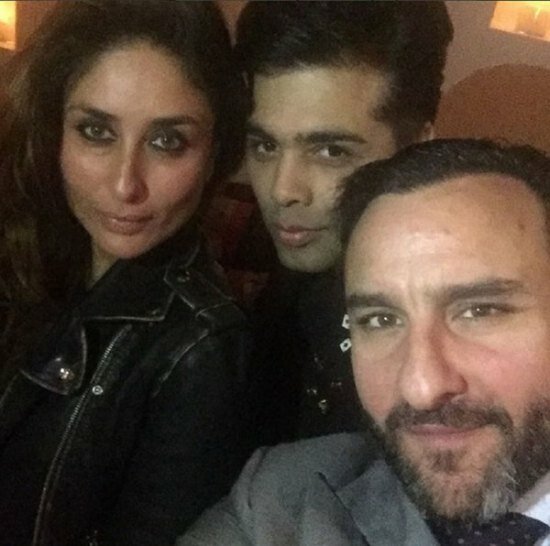 Karan Johar is in London city busy filming his upcoming drama Ae Dil Hai Mushkil featuring Aishwarya Rai, Ranbir Kapoor, and Anushka Sharma among others. The actor was joined by his film crew including Ranbir Kapoor, Saif Ali Khan and Sidharth Malhotra as well as close Bollywood pals Shah Rukh Khan and Kareena Kapoor, and Shweta Bachchan who were all in London too.

SRK is in London to celebrate with his son’s graduation party and so was Shweta Bachchan. Shweta’s daughter Navya Naveli and Aryan Khan have both recently graduated from Sevenoaks, the high profile independent school in Kent.

The star kids also joined Karan Johar in his birthday celebrations. Meanwhile, Kareena Kapoor Khan is holidaying in London too with her Nawab Saif Ali Khan who will be seen in a cameo role in Ae Dil Hai Mushkil.

Posting a picture of SRK and Aryan Khan alongside himself, Karan tweeted: “When you feel older and prouder at the same time. Kids are a strong reminder of how time flies.”

Alia Bhatt, one of Karan Johar's closest associates, wishing the filmmaker on his birthday

Although only few stars were in London to celebrate Johar’s 44th birthday, other celebrities wished the director on Twitter. Actor Alia Bhatt’s love for Karan Johar is very well known. She tweeted a picture of them together and said: “Happy birthday to my friend/father/guide [Karan Johar]. Don't know what I'd do without you! Love you too much.”

Actress Anushka Sharma also tweeted a picture wishing the filmmaker on his birthday.