There are so few ‘pure vegetarian’ (vegetarian-only) Indian restaurants in London that if you’re particular about eating in one, then Sangeetha Restaurant in Hounslow must be on your list. And it is a bonus if South Indian dishes such as Medhu Vadas, Masala Dosas and Idlis cheer you up. Conveniently located a few minutes’ walk from Hounslow West station and good bus connectivity (even from Heathrow), you’re never too far from Sangeetha. 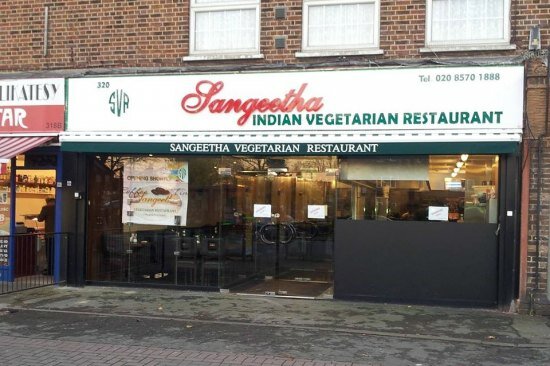 Those from Chennai will fondly remember that Sangeetha Vegetarian Restaurant was started in 1984 on Armenian street, Chennai, serving South Indian food.

Food: The smell of fresh, ghee-pongal is overpowering (in a pleasant sort of way). Sangeetha’s menu is wide and varied featuring usual South Indian dishes like idlis, vadas and dosas. Then there is Indo-Chinese noodles and biryanis. The menu also includes north Indian sabzis, rotis and naans. The authentic filter coffee, butter milk, lassis and masala tea are also on the menu. Sangeetha also serves alcoholic beverages.

Service: The staff is friendly and warm and the food arrives reasonably quickly after ordering. The restaurant and washroom services are fairly clean too and hygienic too. India News Bulletin fondly remembers the days when Sangeetha was bigger with more seating arrangements than it currently is. But the downsizing has had no impact on the quality of service or the taste of the food – which is reassuring. The restaurant is open until 10:30pm all days, so you can even grab a late night bite without resorting to the 24-hour fast food joints.

Sangeetha also deliver food home unlike Saravanaa Bhavan. If you’re within 3-mile radius, delivery is free and the minimum take away order is £20.

Prices: You can have a sumptuous South Indian meal for two people for £25 or under (without drinks). The dishes are reasonably priced and the portion sizes are fair and standard. Sangeetha Restaurant also have a South Indian thali (£7.49) and “Quick Lunch” thali (£5.99) full with appalam, pickle and curd. But India News Bulletin prefers to order individual dishes like the Medhu Vada (£2.99), and Onion Rava Masala Dosa (£5.99) and a dessert. At £7.49, the thali is the most expensive item on the menu, followed by Paneer Tikka Masala (at £6.49) indicating that the prices are reasonable.

Although it serves the same dishes as other South Indian restaurants, Sangeetha’s sambar and aloo masala have a refreshingly different flavour to them. This nuances takes away the “same old, same old” feeling you get after eating south Indian delicacies over and over again in London.

Downside: India News Bulletin has tried many dishes from Sangeetha’s a la carte but time and time again finds that Sangeetha restaurant’s strength is its South Indian food. Unless you really, really don’t fancy dosas, pongals, idlis, vadas and sambar, you wouldn’t want to move too far out into the Punjabi dishes or Indo-Chinese dishes on the menu.

India News Bulletin Hot Tip: Try the hot ghee Pongal with chilled beer and then polish it off with some Ras Malai for dessert, your tummy will thank you, so will your taste buds! Also, try the Idli Dosa batter they sell in packets if you want to experiment home-cooking. The batter is so perfect that it is hard to get idlis or dosas wrong with that! It is quite handy to take batter packs on your way out to treat yourselves to some South Indian healthy breakfast in the mornings.

India News Bulletin pays for its own meals and its reviews are independent.