Umesh Shukla's Oh My God! based on his own successful play Kanji Viruddh Kanji, which in turn was inspired by the Australian film The Man who Sued God (for once the makers acknowledge their source) isn't interested in any serious engagement with the question of god's existence or the purpose of human suffering. 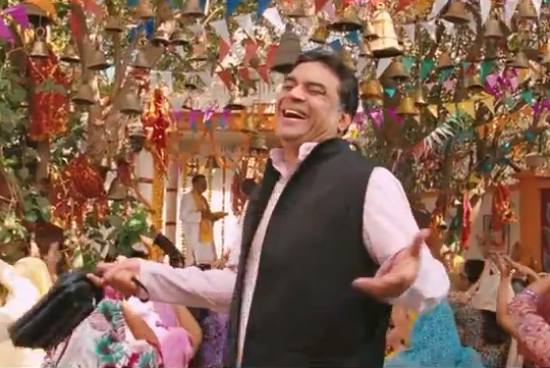 Paresh Rawal as an atheist in Oh My God
Image: YouTube (tseries)

It is far easier to lampoon organised religion and god-men who claim to be emissaries, but like pickled politicians, keep the populace in a constant state of fear and anxiety to serve their limited ends.

The case Oh My God! makes then, is against the commercialisation of religion. Which in itself is quite laudable, considering how much this menace has harmed human society down the ages and particularly in contemporary times.

It is a comedy and a reasonably enjoyable one at that––at least as long as Paresh Rawal as Kanjibhai, the self-confessed atheist, is in the frame and taking potshots at the cult of god and his cohorts. When his shop is destroyed in an earthquake and the insurance company refuses to service his claim, he slaps a case both on the company and on god, because his claim is rejected on the grounds that the policy doesn't include damages caused by 'an act of god'.

Such a scenario is conceivable only in fiction -- there have been cases of powerful god-men being asked to defend themselves in the court of law or to participate in public debates with rationalists and have refused on the grounds of being above the law. In this case though, caricature swamis (a riotous Mithun Chakraborty and sulky Govind Namdeo) are sporting enough to show up in court, although the lopsided writing doesn't give them a chance, thus diluting the impact of the confrontation.

Similarly, when Akshay Kumar arrives as Krishan in a modern avatar (on a Batman-type motorcycle, aided by very tacky special effects) his highly unoriginal suggestion that Kanjibhai read religious texts in order to build his own case seems wishy-washy in the context of an avowed non-believer out to disprove the existence of god! Other than playing the flute lounging on Kanjibhai's jhoola and smiling benignly in court before making a full-costume appearance at the end to show his miracle, god's presence in the proceedings is uninspiring.

Finally, there is the copout end, which, without giving out spoilers (and it's actually quite obvious) is most unsatisfactory, even for a feel-good comedy that only aspires to elicit a few laughs using broad logic. Contrast this with Umesh Kulkarni's vastly superior Deool, which also satirised the business of religion, but with greater wit and charm, and you know how far OMG! could have gone with its scintillating premise, but doesn't dare.