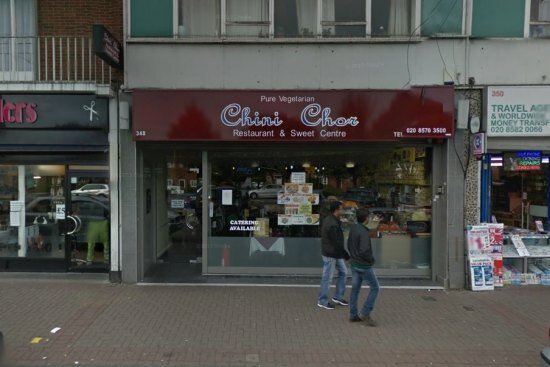 But Chini Chor impresses only with its Delhi chaat and Punjabi  dishes.

Prices: For the authentic taste of Delhi and Punjabi cuisine, Chini Chor is reasonably priced. A meal for two including starters and lassis will be in the region of £25.

Upside: The taste! Delhi chaat dishes and main course meals are cooked, spiced and seasoned beautifully and authentically. The rotis, parathas and naan breads are soft while the curries are delicious. One of the high points of Chini Chor’s curries is that they are not very greasy and taste fresh. Chini Chor is a pure vegetarian joint that does not serve alcohol – a vegetarian teetotaler’s dream restaurant, but chicken tikka masala lovers and beer fans may see it as its downside.

There’s no beer to wash down your Naan and Paneer Karahi, but the refreshing lassis more than make up for it.

Downside: The Delhi chaat at Chini Chor is such a puller that the place is almost always over crowded. The dining layout is crammed up to accommodate as many diners as possible and a table for two is just about enough for two dishes and two drinks. On weekends, the place gets even more crowded, chaotic and haphazard with other diners almost tripping on your toes! As the sweet stall and till areas are very close to the dining area, it is noisy and cluttered too. On weekend evenings, one has to be careful with the drinks and dishes or else they’ll end up on the shirt or lap!

It is best to avoid Chini Chor on Saturday evenings. Even takeaway orders take 35 minutes on a Saturday!

If you are a fan of South Indian food such as dosas, uttapas and medhu vada and chutney, avoid ordering these South Indian dishes in Chini Chor - they won't live up to your expectations.

India News Bulletin tip: Tuck straight into the Delhi chaat for starters (Aloo Tikki or Daal Kachori or Raaj Kachori) and then head straight to the mains -- roti/paratha/naan and Paneer Tikka Masala, Rajmah, or even the simple Aloo Gobhi or Dal Makhni – they all taste heavenly and will transport you to a traditional Delhi household kitchen. The dishes are not very greasy or oily – a rare quality in Indian joints in London as at most places, curries are covered with a thick, unhealthy layer of oil!

And if you have a sweet tooth, dig into Chini Chor’s fresh Gulab Jamun or jalebis – you won’t be disappointed!

You can safely give the Mumbai chaat dishes (Mumbai Bhel or the cold Pani Puri) and South Indian dishes (Idlis and Uthappams) at Chini Chor a miss. Mumbai bhel at Chini Chor is a far cry from the taste of authentic bhel at Chowpatty.

The staff is friendly in that they offer recommendations but at crowded times, the service can leave you disappointed.

India News Bulletin verdict: The taste of Punjabi and Delhi dishes are very impressive but the ambience and crowd can be a put off. As one of India News Bulletin’s reader succinctly puts it : “Only taste is good, so Chini Chor is best for take aways.”

Chini Chor has branches in Hounslow West and in Southall. India News Bulletin’s review of Chini Chor is restricted to its Hounslow branch.

India News Bulletin pays for its meals and all its restaurant reviews are independent and unbiased.