Dear Papa, I am writing to you from my new home in the mountains where the air is so fresh, the water so clean, the sheep so adorable and the women in ethnic costumes so trendy! I now live in a mud house with cute little square windows and have even learnt to make tea on the chulha, sweep the floor and make my own bed. Of course, when it's warmer I sleep on the green grass and gaze at the stars shining bright in the ink blue sky. 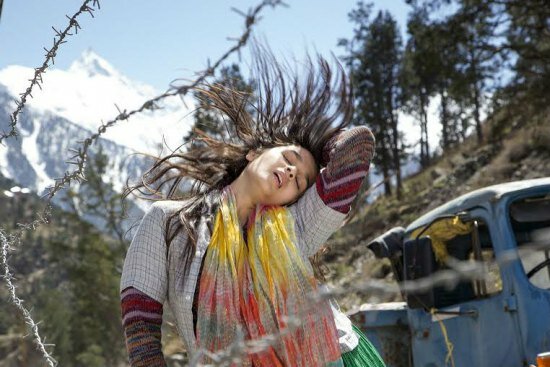 Alia Bhatt from a still in the film Highway

In solitude, I dream of Him. He, who was nothing like those silly chocolate heroes from Love Story and QSQT which Mamma and you must have watched when you were young. Not those city boys for me. Especially not like Vinay, the wimp you got me engaged to; who was scared to even go out for a drive with me in the middle of the night on the deserted streets of Delhi. I was feeling stifled in my own home Papa. Like the proverbial poor little rich girl whose parents can never ever understand her. Who has never breathed fresh air because all family vacations happened in the soulless confines of boring five star hotels. Imagine!

That night Vinay was such a chicken, he didn't even step out of the car when those thugs — sorry, respectable men who only looked scary, brandished guns and looted petrol pumps — picked me up at gun point and shoved me into the back of Vinay's brand new Audi after throwing him out. Later they abandoned the car for an Indian SUV (trust Vinay got his car back before his Papa had to buy him a BMW to cope with the trauma).

We drove for a while and arrived at this house full of ugly men where they tied my hands and threw me into a dark room after stuffing a smelly cloth in my mouth. They were afraid, Papa. They knew how rich and powerful and well connected you are. Only He wasn't scared. When His boss told Him, "Kutte ki maut marega," He scoffed and said, "Kutta hoon, toh kutte ki hi maut maroonga na!" How brave of Him to say that Papa!

There was this other fellow who would keep coming close to me and putting his hand on my butt and whispering into my ears that he'd take care of me and help me escape. But I knew what he wanted Papa. I knew all about the things bearded men do with little girls sitting on the toilet, when they get them chocolates and put them on their laps and cover their mouths with their hands. I had even told Mamma, but she just said “Shhhh,” and asked me not to tell anyone.

But I told Him Papa. Because He slapped that man who tried to force himself on me. He also asked me, "Dhang ke kapde nahin pehen sakti?" which I thought was absolutely right because if I had covered myself properly, that man wouldn't have felt lusty. Still I had this tiny urge to be free. So I ran Papa. We were in an abandoned godown and as I fumbled down the stairs in the dark, I ran straight into Him. He dragged me hard by my hair and led me out. Then He gave me a push and said, "Bhaag". He didn't even chase me with a gun. Imagine!

So I ran and ran and ran. But there was nothing around for miles. I fell to the ground and scraped my right cheek. Then I lifted myself and looked up at the sky. So many stars Papa. I'd never seen them—Delhi is so polluted na? They say an epiphany can come anytime, anywhere. Mine happened in the Kutch. I quietly turned back and walked to the godown where He and His men were waiting for me. When someone tried to lead me back to my prison, He barked, "Apni marzi se bhaagi thi, apne aap hi bhitar jaayegi." That was it. From that moment on, I knew He was the man for me.

The next morning I was chirpy as a sparrow even though He couldn't understand why. Perhaps He thought I was trying to bore Him to death with my chatter. Actually I was trying to behave like the schizophrenic heroines of my real Papa’s films—you know the kind who laugh and cry hysterically for no apparent reason, because they’re ruined by the very men they love?

Naturally, He was suspicious for a long time; wouldn't even let me pee in peace. I knew it was time to prove my loyalty to Him. So when the police in Punjab (yes, yes, we’d gone from Delhi to Rajasthan to Gujarat to Punjab; but wait, there’s more to this fascinating journey) stopped our truck one night, He was worried I'd be found out and was ready to start shooting, but I hid very cleverly and they let us go. Even though I hadn’t been kidnapped for ransom, it was decided that my family would be contacted for money. To this effect, a circuitous plan involving red herrings etc was hatched.

But I ruined it all, because I liked the idea of being kidnapped by Him. So, even as His cronies were clicking a picture of me to send to my family, I was singing and dancing with joy, drinking fresh sugarcane juice and trying to cheer Him up when He was morose about His poor mother who’d been abused by His father when He was a little boy. You understand how hard it is Papa for women of all classes? Rich or poor, they all get ill-treated by men. But He didn’t rape me because He remembered how His mother had been treated. And if He manhandled me, it was only because of His father’s bad blood in His veins…

We kept on driving Papa. By now I was sitting in the front of the truck next to Him—I’d defiantly told Him, He could kill me if He liked, but I would only sit in the front. Later He bought me new clothes, including a local ghagra (by this time we were in Himachal Pradesh, I think) and allowed me wash my hair everyday so that it looked lustrous at all times.

We were closer to our idyll now that He too had warmed up to me in the cold weather. One day He told me to run away. He was letting me go. Just like that, the kidnapping plan was forgotten. But I wasn’t stupid enough to want come back to our claustrophobic home with that ugly chandelier Papa—do you remember how I’d always tell you it depressed me, but you wouldn’t listen? I wanted to be with Him. So I chased Him, from one car to another bus till He could hide no more. I had no rest till I’d rested my head on His shoulder, our love blossoming on the roof of a bus sheltered by snow-capped peaks.

Next I wanted to touch the snow. So He carried me on His back Papa and took me to the foot of a mountain where we sat on a rock and I asked Him to show me His gun. It was so cool Papa, this steel contraption that He’d first pointed at my head all those days ago…  I asked Him to throw it away, but He merely put it back in His bag. It was probably a sign of things to come, although by this time I’d become so delusional, I believed we’d spend the rest of our lives in that mud hut in the mountains grazing sheep and cooking on the chulha gallivanting across ‘Incredible India’ in our truck till the end of time.

But those evil cops you’d dispatched came looking for me Papa. Why did they shoot? Couldn’t they just have arrested Him instead? At least I could have waited the rest of my life for His release and spent my Sundays visiting Him in Tihar jail. But why would they even arrest Him, when He’d done nothing wrong? I lost my mind Papa, when you came to fetch me. That horrid doctor pricked my bottom with an injection (really, is this how they’re supposed to deal with hysterical girls who’ve possibly been through untold trauma?) and when I got home Mamma and the dressed-up aunties were sitting by my bedside, one of them sipping wine from a gold-rimmed glass. And chocolate uncle was there too, to witness my meltdown, to accuse me of being insane.

Yes, I am insane, just like the heroines of my real Papa’s films who’re too brave and bold for this world. I too am not made for your shallow lap of luxury. Hence I rebuked you and demanded to be sent off to the mountains. You gave in and saw me off in a simple hired Innova while your maroon Rolls-Royce shone proudly in your ugly iron-gated compound. I have started a jam factory and built my house overlooking a brook. I come home and dream of Him.

Him and I. Lost children in a lost world that only Imtiaz Ali could fathom in his infinite wisdom…