Review: Gangs of Wasseypur Part 2 – a washed down version of Part 1 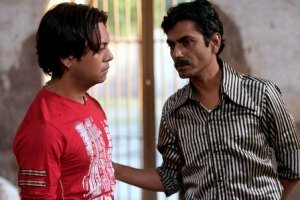 Anurag Kashyap's Gangs of Wasseypur Part 2 takes off from Part 1 and the saga of absurd violence and relentless homage to Bollywood continues all the way till the gory climax. But the sense of history and of real, pulsating characters seen in Part 1 was missing.

Ditto for the music – it was such a powerful ally of the screenplay in the first film.

It is perhaps inevitable that Shahid Khan's lineage weakens with each passing generation while Ramadhir Singh (Tigmanshu Dhulia), the pickled politician-don retains his stronghold over Dhanbad-Wasseypur, because, as he wisely points out in a rare insightful moment, he doesn't watch Hindi movies. "For as long as people in this country continue watching movies, they will keeping getting fucked," he says with cold exasperation.

Unlike Shahid who was too busy trying to survive, and Sardar (Manoj Bajpayee) who had his mind on revenge and women, his two sons, Faisal Khan (Nawazuddin Siddiqui) and the bastard Definite (Zeeshan Qadri, also the film's scriptwriter) can only channel their angst through the movies and their heroes.

Dopey Faisal sees himself as Amitabh Bachchan from Trishul but worries that he may in fact be relegated to Shashi Kapoor's lesser role in the drama of his own life (because till a point, it's his older brother Danish who calls the shots). Definite -- he claims he's named thus because his only 'definite' goal is to kill his father -- is younger and apes Salman Khan, complete with the Maine Pyaar Kiya jacket and the Tere Naam hair style.

He's suitably mercurial and entirely unpredictable. There's a third younger brother, another loose cannon called Perpendicular, with a lisp and the tendency to go around threatening people with a blade in his mouth.

Sardar's women, Najma (Richa Chadda) the formidable first wife and vengeful Durga (Reemma Sen), Definite's mother, are the matriarchs goading their respective sons to exact revenge—think Rakhee ofKaran Arjun who even waited for her sons to be reborn to eliminate the villain. Except in this case, there are two mothers with conflicting demands. Sardar's uncle (Piyush Mishra) who first rescued the boy from Ramadhir's clutches is relegated to the role of a bystander Bhishma-type figure watching his beard grow whiter as the body count skyrockets.

Sultan (Pankaj Tripathi) the killer is still around and his head is a prized catch. Much time is spent plotting and scheming to get to him, leading up to a ludicrous scene in a market with a three-way conversation between the guy who's shadowing him, a motorcyclist, and another one balancing three mobile phones with his pants down. It's meant to be funny. But by now this line of humour is getting tedious.

Surprisingly, so is the romance between Faisal and Mohsina (Huma Qureshi, still sporting aviators now and then). It's the same trick that worked so well with Sardar as the hen-pecked don but falls flat with Faisal, even though Siddiqui is a brilliant actor.

His character, unfortunately, is no Michael Corleone, though that's clearly the prototype. He lacks his father's charm and equally, his ability to lead. Sure, he's brave, but he's also drug-addled and reckless to a fault. Besides, as the voice-over keeps reiterating, he's greedy and has no sense of business.

Hardly a likable character, then, to put at the centre of such a long film and it's easy to see how Definite, even more ruthless and audacious, threatens to upstage him at key moments.

Add to that the introduction of several new characters including Shamshad (Raj Kumar Yadav) and the original drama of rivalry between two families is compromised. So much so, the inevitable slaying of Ramadhir (picturised with boorish glee) leaves you feeling exhausted and relieved in equal parts.

You were meant to walk away with the portent of an epic with Gangs of Wasseypur Part 2. Ultimately, you're just glad it's over.