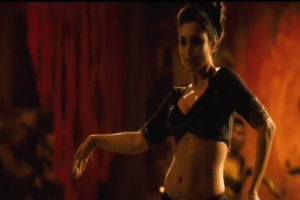 Rani Mukherji-starrer Aiyyaa is lacklustre. It's not the quality of humour, weakness of screenplay or slow pace that ultimately gets to you. It is the crudity and the pelvic thrusts which force you to look away.

In 2009 Sachin Kundalkar released Gandha, a collage of three stories, in each of which, the protagonist has a unique experience involving olfactory perception. The writer-director won a Best Screenplay National Award for this refreshing experiment.

The first of these shorts is called Lagnachya Vayachi Mulgi about a dreamy, ordinary-looking girl from a conservative Pune family whose parents are desperate to get her married and keep lining up prospective grooms whom she summarily rejects.

The walls of her room are adorned with photos of movie stars and she is seen dancing in imitation of Kajol from Dilwale Dulhania Le Jayenge.

The girl works as a typist in an art college alongside a buck-toothed, slightly garishly dressed colleague and confidante who speaks with a silly nasal twang and occasionally poses as a model for the students. While her parents are agonising about how to get her off their hands, the girl finds herself attracted to one of the students in the college whose bodily scent drives her crazy. She starts seeking him out and at one point follows him home...

This story is just under 35 minutes long, funny and very well acted. Now imagine stretching it to two-and-a-half hours and ruining it with unimpressive farcical treatment, raunchy dances and sexual innuendo. The resizing of the canvas results in greatly diminishing the authentic Puneri flavour of the original and the injection of new characters and sub-plots completely ruins the narrative.

That's Aiyyaa, an excruciating adaptation of a simple comic fable blown to a scale that the story can't justify, nor the director handle. Unlike Amruta Subhash in the original who really looks like the dark girl-next-door unable to find a suitable husband, Rani Mukherjee is a star who never really bothers to camouflage her persona. So when the film opens with the young girl's dream involving Madhuri Dixit and Sridevi's famous dances, it ends up looking like Rani Mukherjee reprising her predecessor's songs, rather than an unremarkable girl living in her fantasies.

Further, her colleague in the art school (essayed by the same actress, Anita Date, in both films to drastically different effects) is turned into a regional version of Lady Gaga, outlandish costumes, bad hair day and all. The heroine is given a brother (played by Amey Wagh, whom I recall liking a lot in a Marathi play a couple of years ago, but not in this film), and a suitor (Subodh Bhave, who one feels sorry for). He likes Farooque Sheikh and Deepti Naval's realistic romances, but finds himself stuck instead in a disjointed technicolor extravaganza.

The hero of the film is Prithviraj, who roams around mysteriously and wordlessly in slow motion for much of the time and perhaps it's better that way, because he's obviously uncomfortable with his Hindi dialogues. But on the other hand, your nerves can only take so much of a young woman following her nose and stalking a man without knowing the first thing about him––and all that she finds out from her unreliable sources is so unflattering, it's difficult to fathom why she persists.

Makes more sense to sit at home and watch Gandha on YouTube for free than drain yourself over a lacklustre film like Aiyyaa.