Pics: Saif Ali Khan promotes Race 2 in London days ahead of its release

Bollywood actor Saif Ali Khan, whose action thriller Race 2 is due to release on January 25, was in London to promote the Abbas-Mustan film. The rest of the ensemble cast including Deepika Padukone was not in London for the promotional campaign.

The movie’s release comes just a day before India celebrates its 64th Republic Day on January 26, 2013.

Saif Ali Khan will be seen reprising his original Race character – Ranvir Singh and will be seen involved in a thrilling cat and mouse chase, con, betrayal and action sequences in Race 2.

This is Pataudi Khan’s first film of 2013 after an eventful 2012 when he tied a knot with his sweetheart Kareena Kapoor and basked in the glory of Cocktail success. 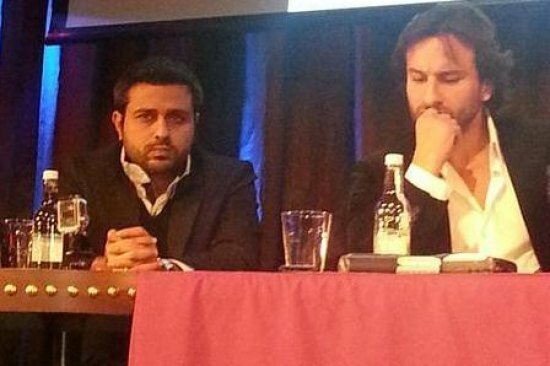 Saif Ali Khan remained the centre of attraction in London’s Hippodrome Casino Square where the Race 2 press conference was held. “I am really happy to be in London...” Saif was heard saying at the conference.

Race 2 is produced by Ramesh Taurani, Ronnie Screwvala and Siddharth Roy Kapoor who married actress Vidya Balan in December 2012. Its trailers and soundtrack released in 2012 have attracted a huge number of audience on YouTube channel.