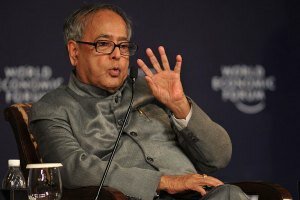 Pranab Mukherjee was today elected as the 13th president of India. He will take oath on Wednesday, July 25, 2012.

The 76-year-old Congressman and the former Finance Minister beat rival P. A. Sangma at the presidential race by securing nearly 70% of the total valid votes. Voting for the presidential election took place on Thursday, July 19. The electoral college for the poll consisted of MPs and MLAs.

"I declare that Shri Pranab Mukherjee has been duly elected to the office of President of India," returning officer and Rajya Sabha secretary general V.K. Agnihotri announced on Sunday after seven hours of counting.

Mukherjee resigned from his role in the UPA government’s finance ministry to run for the presidential election. Prime Minister Manmohan Singh became the acting finance minister in June.

He has previously held other governmental portfolios such as the role of Defence Minister and Foreign Minister. In 2008, he was honoured Padma Vibhushan, the second highest civilian award of India, for his contributions.