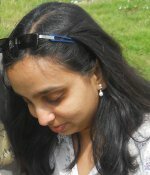 Recently she has started a project whereby she is cooking up dishes following the recipes from the traditional Marathi cookbook Ruchira by late Kamalabai Ogale. She believes, seeking both her profession as a special needs assistant and her passion at the same time has enabled her to achieve a complete balance in her life.

Preeti is also a trained Indian classical dancer and is a part of Virangula Arts Group. She conducts Indian folk and Tribal arts classes in her local community centre in the UK.

A budding photographer, mother of a teenage son and a wife to a doting husband, she takes utmost pride in feeding her men with the simple yet best food churned in her kitchen.

More of Preeti’s recipes can be found at Isingcakes & more

Narali bhaat or sweet coconut rice is a delicacy made during Narali Purnima – the full moon day in the month of Shravan. But if you are nostalgic about home and craving for some traditional Maharashtrian food, then a simple narali bhaat will do the magic. Read more

Summers are synonymous with delicious mangoes - raw (kairi) and ripe (amba). As we head to a balmy spring and summer sunshine, here's a recipe of Kairichi dal or Vatli dal -- a simple yet tasty dal that you can have hot or cold. Read more

Traditionally, Shrikhand is made using a chakka. Chakka was made by hanging curd/yoghurt in a muslin cloth overnight. As a child, I remember aai (mum) making Shrikhand with chakka (tied it on a tap with paraat underneath). The whey which drained off the chakka was later used to make the dough for chapatti. Read more

Everyone loves cookies but if you don’t have much of a sweet tooth, then here’s a recipe of savoury cookies to go with your favourite cuppa! Read more

Makar Sankranti, the harvest festival of India, is celebrated on January 14 every year and is marked by people in Maharashtra exchanging tilguls (sesame laddoos) as a gesture of goodwill. This Makar Sankranti, try making sesame cookies instead of or alongside tilguls. Read more

Sandesh or Shondesh is a Bengali dessert sweet made of Chenna or cottage cheese. Here’s how to make Sandesh from scratch. Read more

Vermicelli is a versatile ingredient that can be used to make sweet as well as savoury dishes. While most relish vermicelli (semiya/sevai) in kheer, sevai upma is a quick and delicious dish. Read more

A traditional Indian dish made of sprouts and spices, Misal Pav is most people’s hot favourite on a rainy day and is enjoyed either for breakfast, snack or even as main meal. Read more

Kaju chi Usal or cashew curry is a traditional Maharashtrian recipe made with the fresh and scrumptious cashew nuts and coconuts available plentifully in the Konkan coastal belt. Read more

This festive season, bake a chai-masala flavoured cake and drizzle it with coffee to make a cinnamon-gingery accompaniment with your cuppa brew and get into the Christmas spirit! Read more