It would be easy to dismiss Tigmanshu Dhulia’s Bullett Raja as a lazy studio-funded collaboration between a reasonably talented director-star duo. Sadly, it doesn’t seem a mere aberration. More likely Dhulia and Saif Ali Khan have run out of ideas and are desperate to cash in their chips. Worth noting here that the filmmaker’s best work, Paan Singh Tomar (2010), came at the end of a seven-year drought. 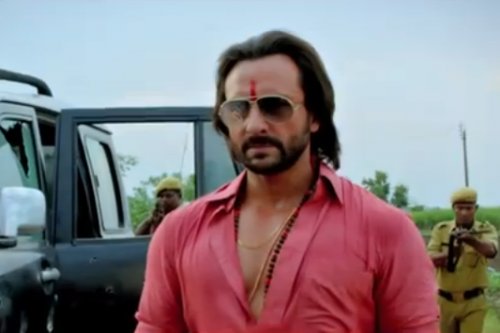 Similarly, Saif reinvented himself in Dil Chahta Hai (2001), only after his career had floundered for nearly a decade.

Point is, they didn’t need to struggle for this one and were probably handed it on a platter. Hence there’s no thought to the script, characterisation, or treatment and it looks like an amalgam of every other film about the UP ganglands we have seen in the past decade. Authenticity of location becomes irrelevant if the people inhabiting it are mere cardboard cut-outs.

In this case there are two misguided youth (!) of ambivalent antecedents—current Hindi cinema doesn’t even have the patience to flesh out the lead characters properly, so what hope is there for those on the periphery?—who join forces under bizarre circumstances, become best friends overnight and suddenly acquire a reputation as the political mafia’s go-to goons.

Dhulia likes these gutless bullies and gives them the five-star treatment with slow-mo struts, flashy dialogues, dashing fights and gun battles and even a girl who latches on to them for reasons beyond comprehension. Picture this: the said girl, Mitali (Sonakshi Sinha), has agreed to meet a crooked businessman (Gulshan Grover) in a hotel room. We’re told she’s an aspiring actress (so it’s obvious why she’s there) and just as Moneybags is warming up to her, Raja (Khan) and Rudra (Jimmy Shergill) barge in to kidnap him because he insulted them at a high-profile meeting of dons where they happened to behave like boors and speak out of turn. (I’m curious to know if such meetings are for real with shady warlords sitting around a table drinking whisky while gun-totting henchmen stand behind them in obeisance).

The girl is in their custody till the ransom arrives, but just as readily as Raja and Rudra become best buddies, Mitali and Raja fall in love and within hours she’s ready to move in with them! So here we have another brainless woman enamoured by a man of not dubious but downright dishonourable reputation merrily living in a house full of gangsters like it’s the most natural thing to do.

Dhulia injects a new villain into the script every 15 minutes which provides gainful employment to Chunky Pandey, Vishwajeet Pradhan, Vipin Sharma, Ravi Kissen, Raj Babbar and of course, Grover. But that’s just in the first half. In the second, he brings in Vidyut Jamwal to compensate for Shergill’s absence so that Khan doesn’t need to shoulder this house of cards by himself.

There’s also the token item song tackily performed by Mahie Gill with highly objectionable lyrics like “Don’t touch my bawdy o more saiyyan/ Tera jala dungi gadda aur takiya”. In an interview published in this morning’s paper Khan confesses that he doesn’t watch Hindi films, clarifying, “I have eclectic tastes”. What’s to be expected then from people who have no pride or respect for their chosen line of work but rubbish like Bullett Raja?