The UK Border Agency has arrested six people including two Indian men and one Nepalese man working illegally at Jin Go Gae restaurant in New Malden, south-west London. The restaurant faces a potential fine of up to £60,000 for employing workers without checking their visas. 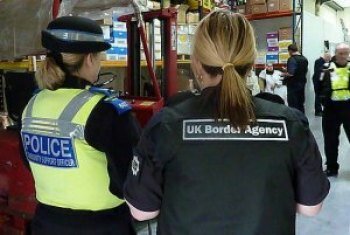 One 39-year-old Indian man was found to have overstayed his visa while another Indian, 43, was also found to be working in breach of his visa conditions. Other employees of Jin Go Gae at Burlington Road who had overstayed their visas included a Nepalese man, a Bangladeshi man, and a South Korean woman, all in their 40s. The UKBA officials also found a sixth illegal worker, a 50-year-old Chinese man, who had entered the country illegally.

The arrests were made after border control officials, acting on intelligence, questioned the workers to establish if they had the right to be and work in the UK.

The 39-year-old Indian and the Nepalese man have been transferred to immigration detention and will be removed from the country. Meanwhile, the other four illegal workers have been placed on immigration bail while their cases are progressed. They will also face removal from the country if the officials find that they have no leave to remain in the UK.

Alongside arresting the illegal immigrant workers, the border control officials also served a notice to the restaurant business warning that a civil penalty of up to £10,000 for each illegal worker arrested will be imposed unless proof is provided that the correct right-to-work checks were carried out. This is a potential total of up to £60,000.

“Businesses in London that follow the rules have nothing to fear, but those who either deliberately employ people with no right to work or fail to carry out the legally required checks on their staff should expect to face heavy financial penalties,” said Jill Smith, from the South London Home Office immigration enforcement team.

“Illegal working has a negative impact on communities. It defrauds the taxpayer, undercuts honest employers and cheats legitimate job seekers out of employment opportunities,” he added.