Despite its thoroughly entertaining exposition and great period detailing (the computer/mobile-free ‘80s with just two state-manufactured cars, HMT watches and all the inconveniences of the License Raj!), something about Neeraj Pandey’s Special 26 left me feeling disturbed. 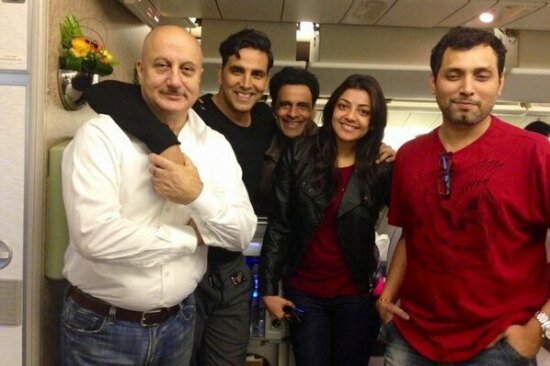 Of course it was fun to see a bunch of ordinary-looking conmen dupe the corrupt and get away with it. But these men are part of the same system––no Robin Hood type philanthropic bones under their skin––and the fact that they thrive in it, ironically reaffirms its effectiveness. The filmmaker’s recognition, nay acceptance, of corruption and moral depravation as an inevitable aspect of India’s progress is implicit in the narrative.

Pandey’s frustration with the system is channelled into exploiting existing patterns and structures to the extent that serves the protagonists’ purpose and still makes the audience feel good.

But how does it work?

The engagement with real issues in both his films -- A Wednesday and Special 26 -- is superficial and in that, an accurate reflection of us, the middle-class, who have reaped the benefits of liberalisation and succumbed far too easily to consumerism and the good life at the cost of our morals. We love these films because we see ourselves in them. Their understanding of and proposed solutions for urgent issues are as wishy-washy as our own.

The protagonists -- the nameless common man of A Wednesday and Ajay of Special 26 -- are prototypes rather than fleshed out characters we can connect with in the same way that we felt drawn towards the best-realised manifestation of the ‘angry young man’ in Deewaar.

Pandey’s both films have things in common. In A Wednesday, a disgruntled old man, frustrated with systemic apathy decides to take matters into his own hands and claims he has planted bombs at the police headquarters and various other places around the city. He truly is a symbol and hence the writer-director doesn’t even give him a name or any sense of personality beyond the invisible presence of a wife who worries about his general well-being and nags him about buying vegetables.

Perched on top of a construction site with a bird’s eye view of the city (making us connect immediately with the emotive timbre of the film, if not the protagonist) and equipped with a few mobile phones and a computer, this lone ranger holds the entire police force to ransom, coercing them to take him seriously and follow his instructions rather than bowing meekly before their ineffectual politician bosses. The film articulates this point very well––that the state machinery, which was meant to protect and serve the common man has been hijacked by selfish and powerful people, and unless they are shocked out of complacency there can be no change.

But good intentions alone don’t a good film make. For instance, Pandey neglects to tell us how this ordinary old man went about hatching such a large-scale conspiracy. Anger may well drive us to say in times of despair, “We should grab a gun and shoot these politicians.” The dangerous import of that statement notwithstanding, let’s assume one of us actually decided to do such a thing. How exactly could we have gone about it? Do we have the means or the access to take on the might of the system for immediate retribution? Assuming that we even managed to plot such a conspiracy, would we get away unscathed in the end like the old man does, walking from the scene of crime (after killing three men charged with terrorism and awaiting trial) while the police commissioner looks on with unreserved admiration?

In Special 26 the heists themselves are thrilling and the biting comment on contemporary morality very appealing, although once again, the screenplay doesn’t care to elaborate on the gang’s modus operandi. Still, I chuckled gleefully as mountains of ill-gotten wealth were excavated from underneath idols of gods and false ceilings alike. If you loot black money from the corrupt they can’t report it for fear of the repercussions and the clever thieves can keep getting away with it till the real CBI catches up with them.

And that’s the moot point. It’s fun to punch holes into a defective model for cathartic pleasure. But if scamsters become heroes and are portrayed as less harmful to society than politicians (is it perhaps because we are all scamsters of varying degrees in our everyday lives, but have no interest in politics or affirmative action?), we are merely validating one kind of corruption over another. Ill-gotten wealth is ok, so long as it’s not vested in the hands of greedy people we have learnt to despise.

It's also telling that the one honest officer in the CBI who stands firm against the tide of corruption becomes the comic antagonist. Wasim Khan isn't the hero of the film for keeping his integrity or risking his life in a job that doesn't even help ends meet, as would have been the case if the screenplay functioned within an old-fashioned (and now curiously outmoded) ethical paradigm. Instead, we laugh at him and are happy when Ajay outwits him in the end.

The last scene of Special 26 is the most telling of this conundrum––having hoodwinked the CBI and fled the country, Ajay and his team are enjoying a match at the cricket stadium in Sharjah, a place which has come to symbolise the ugliness and perversion of what was once merely a game. The story applauds its winners and places them on the victory stand, while Khan continues toiling (needlessly, you'd think) in his thankless job. It isn't hard to imagine that Ajay would perhaps come back to India one day and legitimise his wealth by starting a company, bid for high-profile contracts, and bribe the system he evidently knows well to become a ‘respectable’ tycoon who hobnobs with the same bunch he once looted. Thus the cycle of debauchery continues and on all accounts the filmmaker doesn't lament it.

So, even as we have a good time at the movies with these 'sensible' entertainers, perhaps we need to pause and ask ourselves, what is it about them that's actually making us feel good?