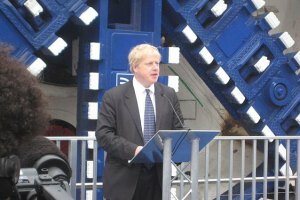 Boris Johnson, the Mayor of London, is set to visit India in the last week of November along with a group of London business leaders. He will visit capital city Delhi, financial capital and Bollywood hometown Mumbai as well as emerging IT hub Hyderabad as part of his India trip.

He is there to champion London city as a great place in which to do business, invest and study and strengthen our ties with the world’s second fastest growing economy – India, according to his department, the Greater Llondon Authoprity (GLA).

In Delhi, Johnson will hand over petals from the Olympic cauldron in the spirit of international friendship shown during this summer’s London 2012 Olympic Games; and talk to Indian students about London’s first class higher education opportunities. The Mayor will also launch new research to encourage Indian business to recruit UK graduates in the Indian capital.

He will then visit the Indian centre of technology at Hyderabad where he will join the London Chamber of Commerce and Industry's trade mission to encourage London’s small and medium-sized businesses to export to India. He will also meet state government ministers to discuss local infrastructure projects and promote London’s expertise in the area as well as address Indian School of Business students to promote London as a ‘Technology capital of Europe’ at a special seminar hosted by Indian tech-giant Infotech.

The London Mayor will then visit Mumbai to host a roundtable with senior figures from India’s film and TV industry to showcase London as a great film location. London has been a favourite film location for top Bollywood production banners including Yash Raj Films. Its latest film Jab Tak Hai Jaan has been extensively filmed in London.

When in Mumbai, Johnson will also discuss India and London as natural business partners with local and British business leaders and industrialists.