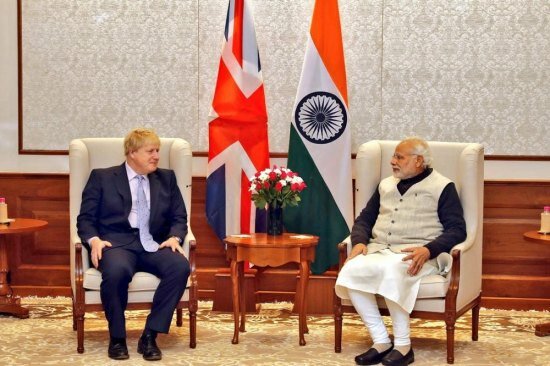 Boris Johnson spoke about the UK’s vision for a Global Britain and a stronger, closer relationship with India. He held talks with Indian ministers, including Finance Minister Jaitley and Minister for External Affairs MJ Akbar, to continue working towards the ambitious partnership that Prime Ministers Theresa May and Narendra Modi committed to during her visit in November 2016.

During his India visit, Boris Johnson also met young Indian entrepreneurs and civil society leaders, as well as hosted a breakfast for British and Indian business representatives and investors in Delhi.

The UK Foreign Secretary then travelled to Kolkata where met CM Mamata Banerjee and representatives of the Cricket Association of Bengal. He also attended a debating competition featuring teams from Cambridge University and the London School of Economics marking the bicentenary of Presidency University.

“It’s a tremendous pleasure to be back in India, a wonderful, beautiful and thriving country,” Johnson said. “As two modern, diverse democracies, the UK and India are natural partners and we are committed to working together to promote our people’s prosperity, improve global security and tackle the challenges that both our countries face today.”

“As well as a trade relationship worth £16bn, Indian companies have already created more than 100,000 jobs in the UK and sent 160,000 of the brightest and best students to our world class universities over the last 10 years.”