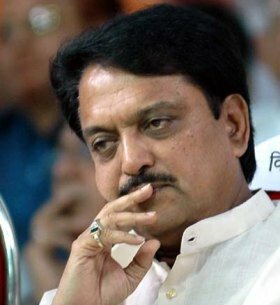 Union minister for Science and Technology and former Maharashtra chief minister Vilasrao Deshmukh has passed away on Tuesday, August 14 in Chennai. Deshmukh was 67.

He is survived by his wife and two sons including Bollywood actor Riteish Deshmukh.

Deshmukh was admitted in Global Health City hospital in Chennai, Tamil Nadu on Monday, August 6, for a liver transplant. Earlier in August, he was diagnosed with both liver and kidney failure at Mumbai’s Breach Candy hospital. His condition has been critical ever since and he passed away on Tuesday at 1.30pm IST.

Popularly known as Vilasrao Bhau, he was appointed as the minister of Science and Technology and minister for Earth Sciences in July 2012 amid the Indian government’s latest cabinet reshuffle. He has also served as the minister of Rural Development and as minister of Heavy Industries and Public Enterprises previously. Minister Vayalar Ravi was handed over Deshmukh's departments in August 2012.

Deshmukh started his political career in 1974 when he became a member of a Maharashtra village Panchayat. He then went on to become a member of the Maharashtra Legislative Assembly between 1980 and 1995 by winning elections.

In his political career, Deshmukh has been in charge of government portfolios such as tourism, transport, sports, agriculture, industry, rural development and education among others.

He was Chief Minister until 17 January 2003, but stepped down in January 2003. He was appointed a chief minister again in 2004, but following the 2008 terror attack on Mumbai, India’s financial capital, Deshmukh decided to step down before starting a career in the Upper House (Rajya Sabha).

Deshmukh’s funeral will be held in Latur on Wednesday, his hometown in Maharashtra.