Lady Vadera, who was a key advisor to former Prime Minister Gordon Brown, allegedly told officials in 2008 that bringing down libor would bring stability to the banking system and improve the health of the economy, according to reports in the Mail.

In November 2008, Lady Vadera co-authored a document titled -- Reducing Libor – in which the authors concluded that “getting down Libor is desirable”. 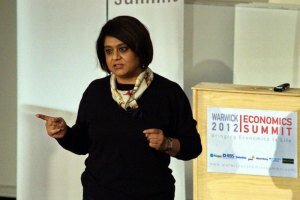 Baroness Shriti Vadera
Image: Wikimedia Commons (Financial Times)
Libor or (London Interbank Offered Rate) is the average interest rate estimated by key banking institutions in London that would become the basis for them to borrow from other banks.

UK and US regulators have slapped a $453m penalty on Barclays on charges of trying to rig Libor as a result of which three of its key figures resigned.