Dreadlocks Story is a film about Jata or dreadlocks - hair matted in tough, thick locks – a hallmark of Indian rishis, sadhus and saints. Director Linda Aïnouche’s film explores the Indian cultural influences on Jamaica’s Rastasafari culture where dreadlocks were prominent. The film gets its first UK screening on June 16, 2015 in Birmingham. In India, sadhus, shiv-bhakths, devdas and devdasis abandoning regular family life are seen to have dreadlocks or jatas. Unlike popularly believed that jata is a sign of lack of hygiene and hair bath, dreadlock requires conscious long-term effort, frequent hair washes and diligence. Sometimes even beeswax is used to create dreadlocks.

But the Jata culture is not restricted to Indian sadhus and sadhvis. Around 1930s, it was seen as part of the Jamaican Rastafari movement. In North Africa, jata is worn by priests and dreadlocks was popular during the growing popularity of Reggae music in the 1970s. The film Dreadlocks Story explores the Rastafari culture and the criticized dreadlocks hairstyle. It also reveals the Hindu, British, and African influences on Rasta history as well as the spiritual link between Jamaican Rastas and Indian Sadhus.

The rich and illuminating documentary is based on qualitative interviews from experts in Rasta culture (including Birmingham-born David Hinds, the lead singer of the legendary band Steel Pulse as well as researchers Ajai and Laxmi Mansingh).

Aïnouche also draws from her own extensive knowledge about Indian culture into the film making it more insightful. She has lived in India and has worked on Indian projects. She completed her Ph.D on Jainism and is also an expert on Indian culture and religions. For the film, she interviewed scholars about History of Indians in Jamaica and Rastafari culture. 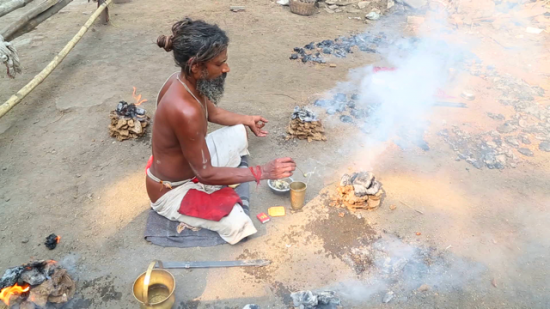 The documentary was filmed in four countries (France, India, Jamaica and the US) with four different languages (French, Hindi, Jamaican Patois and English) and four local crews.

It covers a part of Jamaican and Indian history. It also gives a new approach to sensitive topics about beliefs and taboos. There are many misperceptions and judgments about the Rasta way of life, but few have taken the time to understand the meaning behind their behaviour.

“Indian people and Jamaican people deserve the kudos of their own history! The British have been quite despicable to kidnap Indians to the Caribbean and to treat them like slaves. Those captured have made great contributions to Jamaican society and to Rastafari movement. Who knows if without Indians, Bob Marley would have met the same success?” says Aïnouche.

Today, dreadlocks are found throughout the Caribbean and Diasporas. Thus, their origins reveal to be secondary to the vital role they are playing to mirror the state of mind of the minority rasta communities all over the world.

Dreadlocks Story is an emotional and fascinating take on a topic that has never before been explored through documentary, according to its director. The film uses music from India’s Ska Vengers (India’s first Ska-Jazz band) and UK’s reggae band Steel Pulse.