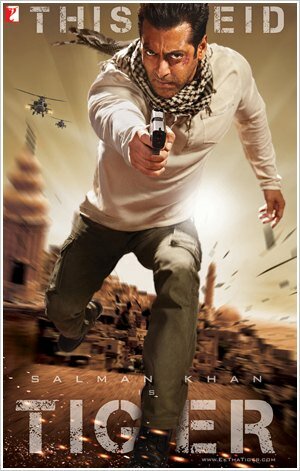 Directed by Kabir Khan and produced by Aditya Chopra, the story is about an agent named “Tiger” from the dark world of intelligence and espionage.

The film tracks the life of an Indian scientist suspected of selling missile technology secrets to Pakistan. A secret agent  codenamed Tiger (Salman Khan) appointed by the Indian government sets out to investigate the scientist’s activities. While he investigates, he falls in love with the woman who assists the scientist -- Zoya (Katrina Kaif).

The film was produced on a budget of 74-crore rupees and has scenes filmed in various international locales including Diblin in Ireland, Istanbul in Turkey and some regions of Chile.

Because of the sensitive story plot of the film -- tracking the relation between India and Pakistan, the film was banned in Pakistan.

Upon its release, Ek That Tiger was declared an all-time blockbuster with its Box Office collections falling slightly short of the highest grossing Bollywood film 3 Idiots.