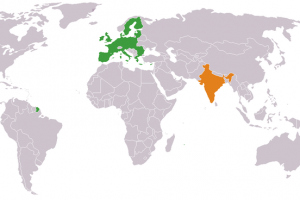 Commissioner De Gucht and Minister Sharma will hold another ministerial meeting before 2013 to conclude the negotiations. To this end, negotiating teams from both regions will identify possible solutions on all remaining issues in the coming months.

A number of inter-sessional meetings will be held and chief negotiators will also meet again in September to take stock of the negotiations, according to the European Commission (EC).

Both sides are keen to find results which will give an important boost to trade between the EU and India. This is particularly important in the current economic climate.

The EU-India FTA negotiations were launched in 2007 with an aim to increase the trade in both goods and services and investment in both the regions.

Since 2004 India is one of the EU's "strategic partners" and from 2005, the EU-India Joint Action Plan has aimed at realising the full potential of this collaboration in key areas of interest to India and the EU.

However, India's trade regime and regulatory environment has restricted further trade progress between the two regions, the EC has said.