Two people have been arrested by the Met Police’s Human Trafficking Unit in connection with an investigation into the Lambeth slavery and domestic servitude. The suspects include an Indian-origin man -- Aravindan Balakrishnan -- and a Tanzanian woman, according to reports.

The two suspects involved in forced labour and domestic servitude, however, have been bailed until January 2014.

Aravindan Balakrishnan is also known as Comrade Bala and is a Maoist cult leader. 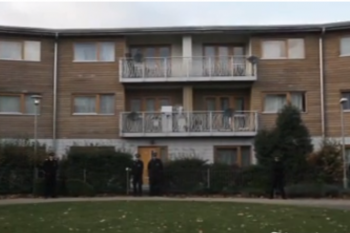 Police guarding the apartment where three women were held as slaves for 30 years
Image: YouTube still

The arrest comes just days after it emerged that three women -- a 69-year-old Malaysian woman, a 57-year-old Irish woman and a 30-year-old British woman—who were held as slaves for 30 years were rescued from a house in Lambeth, south London.

The policed arrested the two suspects, allegedly including a 73-year-old man of Indian-origin and a 67-year-old Tanzanian woman, after the Irish woman said on a phone call to a charity that she had been held against her will in a house in London for more than 30 years. She also stated there were two others held with her, who were subsequently rescued by the police.

The man aged 73 and a woman aged 67 were both arrested on suspicion of being involved in forced labour and domestic servitude, the Met Police confirmed.

While media reports claim that the man arrested is of Indian origin, the Met police neither confirmed nor denied it. “The two people arrested are not British nationals, at this stage we are not prepared to provide any further information about them,” it said.

The police did not disclose the nationalities of the suspects but said that they have “been in this country for many years”.

"What I can say with some certainty is that the two suspects in this case were arrested by the Metropolitan Police Service in the 1970s, some considerable time ago,” said Commander Steve Rodhouse, from Specialist Crime and Operations.

The suspects have also been arrested on suspicion of immigration offences and the police is working closely with the Home Office Immigration Enforcement.

Detective Inspector Kevin Hyland, from the Met's Human Trafficking Unit (HTU), said: "This is the very early stages of a complicated and sensitive investigation. These women are highly traumatised, having been held in servitude for at least 30 years with no real exposure to the outside world.

“There is no evidence to suggest anything of a sexual nature, however the investigation is ongoing,” Hyland added.

Whilst the police investigation continues, the suspects are released on bail, but they have not returned to the property where the police carried out the operation to rescue the three women.

"What we have uncovered so far is a complicated and disturbing picture of emotional control over many years, brainwashing would be the most simplest term, yet that belittles the years of emotional abuse these victims have had to endure,” said Commander Rodhouse.

Currently, the entire HTU team of 37 officers are working with the Met Police on this Lambeth women ‘slavery’ investigation allegedly involving an Indian-origin suspect.