King’s College London has honoured Indo-Anglian journalist, writer and historian Khushwant Singh with a Fellowship of the College – its highest honour -- for his exceptional achievements. 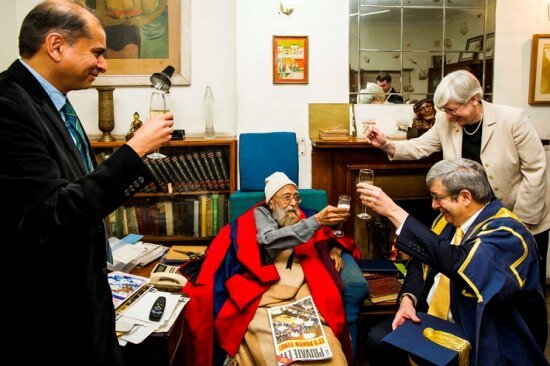 The award ceremony took place in Delhi at Khushwant Singh’s home on Sunday 12 January, 2014 -- days ahead of his 99th birthday. Singh, now 98, joined King’s as an undergraduate in 1934 and has completed 80 years of association with the college.

In recognition of his services to the college, Singh was honoured by Professor Sir Rick Trainor, Principal and President of King’s College London and Professor Sunil Khilnani.

The Indo-Anglian began his career just before the Second World War practising law at the High Court of Lahore. Later, in 1947 he entered the diplomatic service of a newly independent India and served his country for four years in London and Ottawa.

After pursuing the legal profession for more than 11 years, Singh became a journalist and was the editor of prestigious titles in India, including the Hindustan Times, the National Herald, the Illustrated Weekly of India and New Delhi  magazine. He was instrumental in increasing the Illustrated Weekly’s circulation from 60,000 to 410,000 during his tenure. Singh is best known in India for his fiction-writing, sense of humour, and his love for poetry.

He was also a member of the Rajya Sabha and as a Sikh, he was part of the protest against Operation Bluestar – the military attack on the Golden Temple in Amritsar in 1984.

“We are delighted to confer this award on Mr Singh in celebration of the substantial achievements of  one of our most successful, and best-known Indian alumni,  as he enters his ninth decade of association with King’s College London and his 100th birthday,” said Professor Sir Rick Trainor.