One of UK's prominent Maharashtrian community Association – Marathi Mandal Reading – is supporting and participating in a charity event to raise money for the suffering farmers in India, especially the distressed farmers in Maharashtra's Vidarbha region. Called the 'Help for Farmers Charity Walkathon', the event is aimed at contributing and bringing a difference in the Indian farmers' lives. 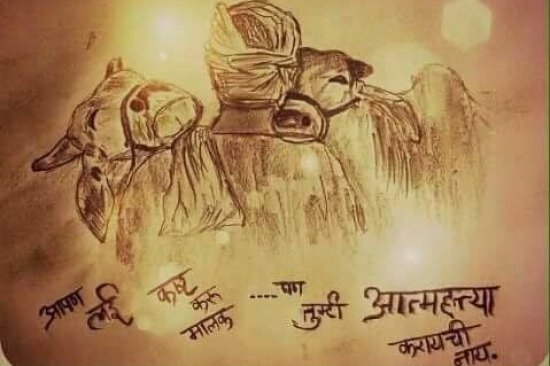 The Charity Walkathon is scheduled to take place on Sunday, November 29th at 10:15am. The association has arranged for a meet up time of 09:45am to start the walkathon promptly on time and finish at 12:45pm.

According to the HelpforFarmers organisers, Farmers in India, especially in the Marathwada and Vidarbha regions of Maharashtra are committing suicide owing to prevailing drought conditions and unending debt. It has not rained enough for the last few seasons and whatever was produced goes into repaying outstanding debt. The situation is acute for the small land holders. Over 1500 Farmers have committed suicide in 2015 so far alone. "We are raising funds to support families of Farmers in India who have committed suicide or are in a vulnerable situation forcing to contemplate suicide."

The walkathon will start at Chalfont Park, opposite Asda supermarket in Chalfont Way, Lower Earley, Reading (RG6 5HQ). The organisers have not yet published the route map as that is likely to depend on weather conditions and will be shared with participants just before the walkathon begins.

Mindful of the community's varying age groups, organisers have scheduled a short walk route and a long walk route to ensure maximum participation. The 3 Kilometres Short Walk route is aimed for people preferring short walks including children. [Starting from Chalfont Park – Behind Asda/Leisure Centre – under the Rushey Way bridge – walkway towards Chatteris Way – footpath till Kensington Close – walkway till Meldreth Way Roundabout – back to Chalfont Park].

There is no entry fee for the HelpforFarmers Charity Walkathon but donations can be made at https://fundrazr.com/campaigns/813R33/ab/05ETle and the association is aiming to raise £1000.

On the HelpforFarmers UK page on Facebook, organisers say: "We are committed to making a difference in the lives of the struggling farmers and villagers in India. With this initiative we derive fulfillment and satisfaction by bringing hope and optimism in their lives and smile on their faces," the organisers have said on Facebook.

India News Bulletin hopes the charity event raises the estimated funds and wishes all the walkers all the best.