Raksha Bandhan – the Indian festival of Brother-sister bonding and protection - was celebrated with equal pomp and enthusiasm by UK Indians. The Armed Forces Hindu network hosted Raksha Bandhan events in temples across London, Birmingham, Bradford and Edinburgh to allow local youths to tie Rakhis on the wrists of British troops personnel. 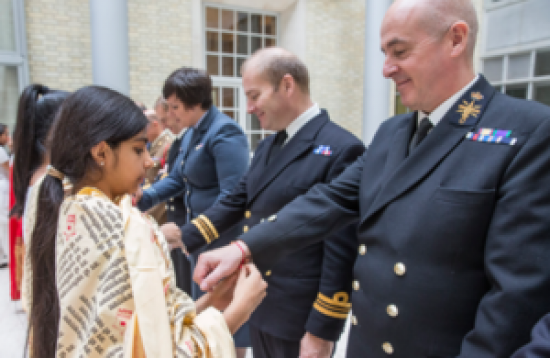 The community Rakhi celebrations on 28th August – Raksha Bandhan day - offered an opportunity to enable the UK Indian community and the Armed Forces to come closer, better engage and share common values. Currently, there are 950 Hindus serving personnel in the British Armed forces.

In Birmingham, the popular Balaji temple hosted Raksha Bandhan event to allow local people to bond with Hindu men in the Armed Forces.

The local youth tied Rakhis (thread bands) on the wrists of Armed Forces personnel to represent and reinforce bonds of friendship, mutual protection and support, according to the UK government Ministry of Defence press release.

According to MoD news, the rakhis tied around the wrists of Armed Forces personnel represented a promise for the Hindu community to respect the work they do, and a desire that they keep safe.

Raksha Bandhan's bonding and protection symbolism with the rachis date back to the time when Shachi, wife of Lord Indra (King of Heaven), tied a sacred protective band to his wrist before he went into battle with evil King Bali, whom he ultimately defeated.

Speaking from the Raksha Bandhan event in Birmingham, Minister for the Armed Forces Penny Mordaunt said: "Our challenge in the UK Armed Forces is to ensure this solemn vow of Defence and protection extends beyond the family, beyond even the community, to the country itself. This is the exact principal we see today in the Hindu community as we celebrate Raksha Bandhan."

"Events like today remind us that Defence depends on more than money and muscle. It’s about individual commitment, that willingness to take on responsibility for the well-being of others and bringing the nation together."

City Hindus Network's Prinai Ntahwani said: "The first exposure that I had to Hindu principles and values were the stories I was told as a kid. There’s a common thread that runs through these stories, which is the triumph of good over evil and the requirement that every one of us ensures that good prevails."