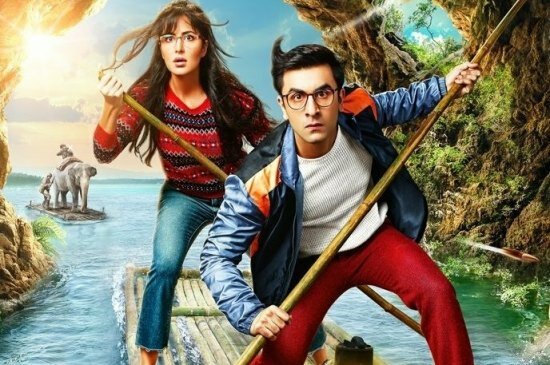 It looks like Ranbir Kapoor and Kartrina Kaif’s film Jagga Jasoos will finally hit the theatres soon after months of delay. For now, the first song Ullu Ka Patha shows the ex-couple dance together like a dream with stunning steps and synchronised moves.

The song Ullu ka Patha from Anurag Basu’s upcoming film Jagga Jasoos is already trending on special media within hours of release, thanks to the magic and chemistry between the lead pair Ranbir Kapoor and Katrina Kaif.

Anurag basu is back with brilliance! This #JaggaJasoos song made me smile right through! https://t.co/MkQfyK4olA #ullukapatha loving it!

Sung by Arjit Singh and Nikita Gandhi, the music is composed by Pritam.

Ullu ka Patha starts with Katrina dressed in cute denim dungarees and a yellow t shirt and sporting glasses while Ranbir Kapoor is donning a maroon shirt and brown casual trouser. What’s mesmerizing in the song is the unique dance steps performed by Ranbir and Katrina together that makes up for some ‘stunning visuals’ as film analyst Taran Adarsh said on Twitter.

Jagga Jasoos is a musical adventure romcom directed by Basu and produced by Basu and Ranbir Kapoor. Releasing on July 14th, Jagga Jasoos revolves around a young detective searching his missing father and the adventures he goes through during that. As a musical, it is reported that the film has more than 20 songs. Here, enjoy the first ever song released from Jagga Jasoos and the chemistry between the lead pair.