Shah Rukh Khan was the chief guest at Dhirubhai Ambani International School's 12th Graduation Ceremony. His ‘straight from the heart’ speech full of humble personal experiences, self-deprecating humour and inspiring messages to the new graduates went down as a treat with the audience. 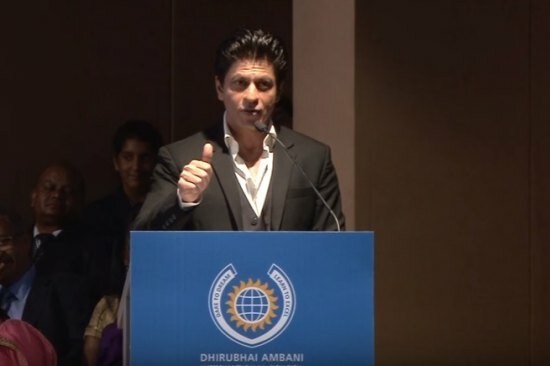 Sharing the 20-minute speech with his fans on his Twitter account, the Fan actor said: “Take what you can from this and ignore whatever. This is from the heart.”

SRK was invited as the chief guest for the ceremony by his dear friend Nita Ambani who also is the chairperson of the school.

Looking dapper in a white shirt, waist coat and suit, the actor’s talk was peppered with wit and humour about his movies that didn’t do well and his ‘rubbish’ poetries. It was also full of his humble upbringing in Delhi, his inspiring parents and the lessons he learnt as he was growing up. He motivated the graduates to not panic or give up and even urged them to not be afraid of their own creativity – whatever it be. He urged them to pick and take a path in life adding that it is more important to go on a journey than worrying about taking the right path because there will be rights and wrongs in everyone’s lives anyway.

Much of SRK’s witty and honest speech was drawn from the presents his father gifted him when he was young. He also narrated personal incidents from his teen age days to inspire students to learn to laugh at themselves.

He concluded with the line: “Go forth, be free, make wrong choices, you will still succeed because of the gift of education and your parents and teachers.