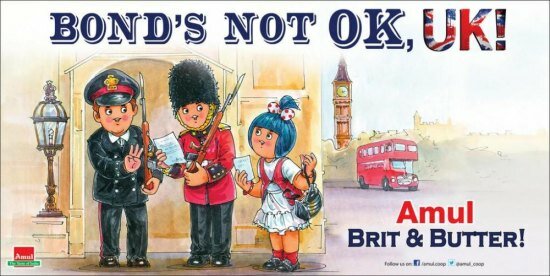 Amul, known for its satirical take on events current affairs and popular culture, has published a cartoon with the line “Bond’s not OK, UK!”.

The cartoon features iconic London landmarks such as the Big Ben and the red bus and the guards in Buckingham Palace. One of the guards is gesturing the number three (indicating £3000) to the Amul mascot girl.

Earlier this week it was revealed that visa applicants from countries with a high risk of visa offenders such as India, Pakistan, Sri Lanka, Bangladesh and Nigeria could be charged £3000 “bond” fees (2.7 lakh of Indian rupees) for a valid visa. The money will be forfeited if the visitor overstays in the UK.

According to the Sunday Times, which revealed the UK government’s strategy aimed at cutting immigration levels to the UK, the pilot could be rolled out in November and will apply to visitor visas first.

That means a family of four from India planning a holiday visit to the UK will have to keep aside £12,000 (10.8 lakh of rupees).

But after the scheme proved controversial and unpopular in India and Nigeria, it is thought that the Home Office is re-evaluating the bond visa strategy.