Two of the most dependable Indian batsmen and cricketing icons, Sachin Tendulkar and Rahul Dravid, have both ended their career in the Twenty20 cricketing format. The two stars were given Guard of Honour after their final T20 match on Sunday. 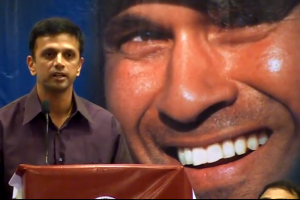 Tendulkar played his last Twenty20 innings on Sunday as part of the Mumbai Indians team. Although Tendulkar made just 15 runs in his final innings, his career ended in style as his Mumbai Indians team won the 2013 Champions League Twenty20 by 33 runs. Earlier this year the team also won Indian Premier League trophy too.

Tendulkar, 40, previously announced his retirement from one day internationals. He is also planning to retire after his 200th Test match, he revealed.

His team Mumbai Indians played the Sunday T20 match against Rajasthan Royals in Delhi led by captain Rahul Dravid who too marked his retirement from the T20 format.

Rahul Dravid, labelled “The Wall” for his consistent and dependable batting performance, announced his retirement from one day internationals in 2012.

Dravid also 40, was awarded the Guard of Honour like Tendulkar.

The Sunday Twenty20 match at Ferozeshah Kotla ground between Mumbai Indians and Rajasthan Royals was an electrifying and iconic game for cricket fans as two all-time batting sensations were set to exit from the format on the same day after the same game. Both the players praised each other in their farewell speech.

Indian media paid tribute to both the cricketing icons with The Hindu saying: "It is a rare occurrence that two all-time batting greats, belonging to rival teams, exit from a popular form of cricket in the same match at the same venue.”

Indian cricket fans paid their tribute to both Tendulkar and Dravid on social media sites such as Twitter and Facebook too.