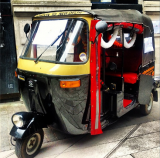 Maha Kumbh Mela 2013 kicks off as millions bathe in Ganges

Millions of Indian devotees have taken a dip in the Ganga-Yamuna confluence at Allahabad, India starting from as early as 5am on January 14, to mark the beginning of Maha Kumbh Mela – one of the biggest religious gatherings. Read more

One day after hundreds of protesters demonstrated outside the Irish embassy in New Delhi over Ireland’s abortion laws over the death of 31-year-old Indian Savita Halappanavar, protests have spread to Galway and Dublin. Halappanavar died of pregnancy complications in a hospital in Ireland after she was refused abortion services. Read more

An extremely rare Indian artifact – an 1825 royal horse-drawn State Carriage owned by the Maharaja of Mysore, Southern India – will go under the hammer on Saturday, November 24 at Brooklands in Surrey, England. Read more

Indian coffee lovers will be able to grab a brew from the popular American coffeehouse chain Starbucks in Mumbai as it launched first store in the city on Friday, October 19. It has collaborated with Tata Global Beverages Limited in India to open the first store in south Mumbai with the name Tata Starbucks. Read more

Nasa honours Indian inventors including one who built pomegranate deseeder

Five inventions from eleven Indian designers from Delhi, Bangalore, IIT Bombay as well as Bihar and Assam have been honoured by Nasa Tech Briefs magazine for their ingenuity. One of the most popular entries was a simple pomogranate deseeder by engineer Uddhab Bharali from Assam. Read more

Complaints about UK doctors are at an all-time high with GPs, psychiatrists and surgeons attracting the highest rates of complaints, according to a report from the General Medical Council (GMC). Read more

Saif Ali Khan in London for the Burberry fashion show

Bollywood actor Saif Ali Khan rubbed shoulders with the who’s who of the fashion, sports and Hollywood fraternity this week at the Burberry Fashion show in London. Read more

London Fashion Week (LFW) has kicked off in the UK capital on Friday 14 September and promises to feature creative rising stars.  Read more

The British Royal Family is seeking legal action against the French magazine Closer for publishing pictures of topless Kate Middleton - the Duchess of Cambridge, but it is not the end of agony for the royals as more international magazines publish the same pictures. Read more