FTSE 100 firms have rated India as their destination of choice for investment, according to M&A statistics. In the last decade, India has attracted $31bn of investment across 145 deals – more than any of the other BRICS nations. 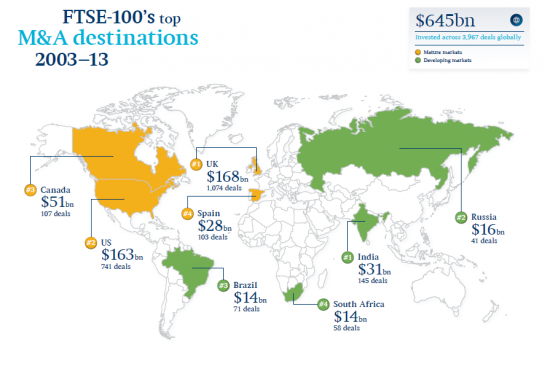 An analysis into UK companies’ investment preferences by law firm Freshfields Bruckhaus Deringer has revealed that India was behind only UK, US, and Canada to attract FTSE 100’s investment. On the contrary, India’s arch competitor China secured just 1% of FTSE 100’s total M&A investment and failed to make it in the top ten most targeted nations.

“The FTSE 100 investments over the past decade have been geographically concentrated, with more than three quarters targeting just ten countries. When it comes to searching for faster growth, India has tended to be the front runner over the last 10 years,” said Edward Braham, global head of corporate at Freshfields.

Top British businesses spent $645bn across 3,967 deals globally, with the UK and US accounting for the lion’s share – more than half (51%) followed by Canada and India. Among other BRICS nations, Russia attracted 3% of the FTSE 100’s M&A spend ($16bn across 41 deals), South Africa and Brazil attracted 2% each ($14bn).

One telling example of FTSE 100’s investment interest in India is BP’s strategic collaboration with Mumbai-based conglomerate Reliance Industries in 2011 for $7.2bn. Other significant deals include Vedanta Resources’ series of acquisitions of stakes in Cairn, an Indian oil and gas exploration and production company.

“India has been more open to international investment in a range of sectors over the past decade, particularly those that are capital-intensive and have needed international expertise. British companies have been keen to capitalise on the opportunity and make the most of established historical, cultural and diplomatic ties,” said Pratap Amin, Chairman of the firm’s India Group, commenting on India being the FTSE 100’s top investment destination among emerging markets

‘While Indian deal activity is undergoing a temporary slowdown, partly due to uncertainty over forthcoming political elections, India remains an important international destination for M&A. Stocks are at historic highs and private equity houses are also starting to eye up opportunities there again,’ Amin said.

By comparison, international companies have gained a foothold in China through joint ventures rather than outright acquisitions, according to Braham.

International buyers have also faced restrictions [in China] when acquiring larger high-quality assets, which are typically state-owned, he explained.

“Despite a few notable mega-deals, we are yet to see M&A levels recovering to historic norms. However, there seems to be more confidence in the boardroom and Britain’s largest companies are continuing to look for growth in developing markets, particularly in Asia and Africa,” Braham further said.

Many countries that have not previously featured prominently in the FTSE 100 investment hit list -- such as Indonesia, Mexico, Nigeria and Turkey – are now becoming desired M&A destinations. The continued shift in global economic power towards Asia, Africa and other developing regions will significantly change FTSE 100’s investment activity in this decade, Freshfields’ analysts concluded.