In a bid to boost its public support amid corruption allegations against ministers as well as to defend its unpopular economic reforms such as the recent FDI reforms, prominent Congress party members held a mass rally in New Delhi’s Ramlila Maidan on Sunday, November 4. 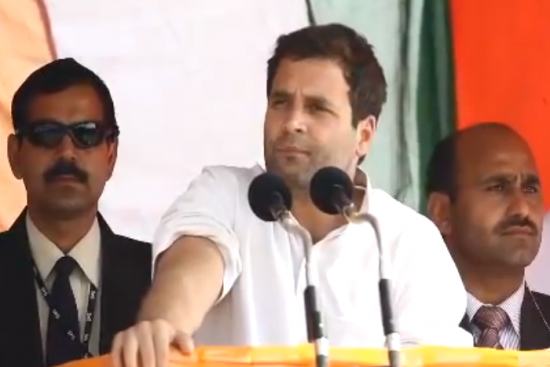 Congress's Rahul Gandhi addressing the crowd at a public rally in Agra, UP in February 2012
Image: YouTube still

Prime Minister Manmohan Singh said that the recent FDI reform measures, including FDI in retail and aviation is aimed at boosting India’s growth and to create more job opportunities for Indians.

Singh accused the FDI reforms’ opponents and the Opposition party of “misleading the country” by saying that the FDI in retail will adversely affect the farmers and small, local traders.

Meanwhile Sonia Gandhi chose to address the issues of corruption. In the past two years several corruption allegations have been levelled against her party and its allies.

Most recently, her son-in-law Robert Vadra had allegedly bought premium properties at “throwaway prices” and sold them for a huge profit margin.

According to Kejriwal, Vadra’s wealth increased from 50-lakh rupees to 300-crore rupees in just three years.

Other corruption allegations that mired the Congress party in the last couple of years include the coal-mining scandal and the 2G spectrum scandal involving ministers and politicians illegally undercharging telecom companies for licenses, which they would then use to create 2G subscriptions for cell phones.

"Corruption is a cancer, it is a disease," said Gandhi. "We will continue to fight this disease."

But she heavily criticised the Opposition party BJP which is using the ruling party’s corruption scandal to shore up support for itself. Those who dig a pit for others to fall should know that a well is waiting for them to fall into, she said.

Gandhi too defended the FDI reforms saying that no country can escape the effects of the global economic crisis. She added that radical reforms such as increasing FDI in retail are important for India’s economic progress in these tough times.

She also praised the prime minister’s and the party members’ vision to improve the lives of the common man.

But all eyes were on the future leader of the party and the possible future Indian PM Rahul Gandhi. He focused most of his speech on the future of India as well as on how the Congress part, in its tenure since 2004, has brought transparency to the system with its RTI (Right to Information) legislation. He also spoke about the importance of liberalisation and economic reforms.

Rahul Gandhi is likely to be Congress party's candidate for prime minister in 2014 elections. However, despite speculations, he was not handed any major ministerial portfolio in the recent cabinet reshuffle in October.