A fire broke out in the AC (air-conditioned) coach of Nanded-Bangalore Express killing more than 26 passengers and injuring more than 15 at 3.30am IST on Saturday. 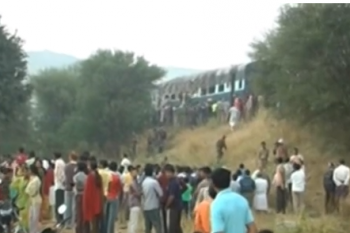 The D1 AC compartment caught fire as Nanded-Bangalore Express neared Kothacheru railway station in Andhra Pradesh’s Anantapur district at the early hours of the morning when most passengers, including children and women, were fast asleep.

The train had left Bangalore after 9.30pm IST on Friday to its destination Nanded. There were more than 65 people on board the compartment when the mishap occurred. While many passengers pulled the emergency chain and jumped off the train in darkness as they spotted the smoke, about 26 passengers were choked and charred to death by the fire and more than 15 got injured. The worst-affected passengers were those occupying seats between 62 and 72 of the AC compartment.

While investigation to determine the cause of the fire is underway, short circuit in the AC compartment may have triggered the train fire, according to railway officials. Some others suspect inflammable material on board as the cause for fire.

The injured passengers have been admitted at hospitals in Dharmavaram and the railway minister, Mallikarjun Kharge, has promised compensation of Rs 50,000 for the injured and Rs 1-lakh for those severely injured. Kharge has also promised Rs 5-lakh for the family of the dead passengers.

Efforts are also underway to identify the dead passengers but because many have been burnt beyond recognition, the authorities will use the reservation chart and DNA tests to establish identities and inform next of kin.

Prime Minister Manmohan Singh expressed his shock and grief at the train fire incident and has held talks with Kharge to enquire about the rescue and relief operations at the Nanded-Bangalore Express train accident site.

PM directs Railways and State govt authorities to extend all possible help to the victims in rescue and relief operations. #TrainAccident

The final number of the passengers dead, missing and injured continues to remain uncertain.

The Helpline numbers for information about the fire on Nanded-Bangalore Express train are: