US President Barack Obama has inaugurated his second term in the White House after taking the oath of office in Washington DC on January 21, 2013. Obama becomes the 44th and current president of the US. 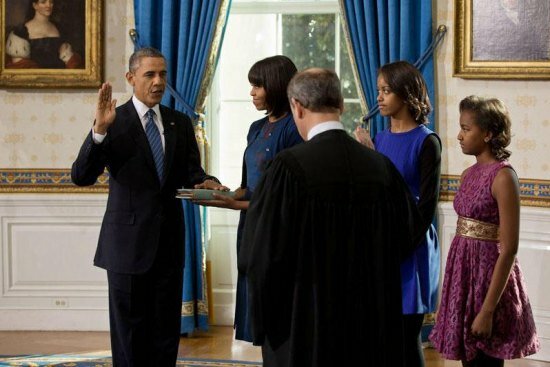 Barack Obama has officially been sworn in for a second term as US President
Image: Twitter (official White House account)

Several thousands of people gathered to see Obama being publicly sworn in by US chief justice John Roberts.

The official ceremony took place in the Blue Room – the residence of the US president – in the presence of his wife and the First Lady Michelle Obama and their two children Malia and Sasha. The president rested his hand on the family’s traditional Bible for taking the oath.

Prior to being sworn in, Obama signed the nomination papers for his cabinet and delivered an inaugural address in which he spoke about climate change, role of the US Defence and Army as well as school reforms.

"The oath I have sworn before you today...was an oath to God and country, not party or faction,” the President said according to an official tweet by the White House Twitter account

"My oath is not so different from the pledge we all make to the flag that waves above & that fills our hearts with pride."

Just hours before the president’s oath ceremony, Joe Biden was sworn in as the vice president.

In his second term, Obama has a tough task at hand to revive the US economy, tackle gun crime, resolve the state health debate and lead international peace talks and climate change activities.