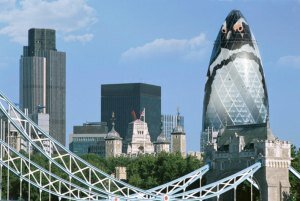 Londoners as well as tourists visiting London for London 2012 Olympics Games this summer could see a giant Penguin Gherkin.

The ZSL London Zoo authorities are contemplating a bold concept -- to transform the City’s iconic Swiss Re building, The Gherkin to ‘The Penguin’.

They have commissioned a production team to draw up a dramatic redesign of the famed skyscraper to remind visitors to London of their penguins.

“We don’t want anyone to miss our penguins, and they certainly wouldn’t be able to miss this one looming over the capital,” said Emma Edwards, the Zoo’s head of communications.

“We think ‘The Penguin’ would be a striking addition to the London skyline and serve as a perfect reminder to Londoners and tourists alike to visit ZSL London Zoo and Penguin Beach this summer.”

“We know it’s audacious, but let’s be honest – penguins are a lot more interesting than gherkins!” Edwards added.

Earlier this year, LOCOG [London Organising Committee of the Olympic and Paralympic Games] awarded the Zoo the coveted ‘Inspired by 2012’ mark for its Animal Athletes events – taking place all summer.