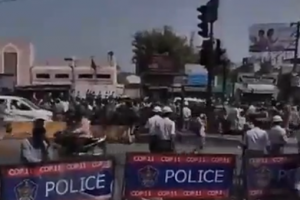 Home Minister Sushilkumar Shinde has visited the sites of two bomb blasts in the busy in the Dilsukhnagar area of Hyderabad city, a day after the attack killed 16 and injured nearly 120 local people.

While no group has claimed responsibility for the Hyderabad twin blasts, the Indian government has begun the investigation into who is behind the attack.

On Thursday after 7pm local time, two explosions hit the Dilsukhnagar area popular for its restaurant, theatres and the biggest fruit and vegetable market. It killed 15 people but the death toll is likely to rise the Indian authorities have said.

The two blasts were planted on two bicycles 10 minutes apart from each other in the busy fruit market.

Prime Minister Manmohan Singh strongly condemned the attack: "This is a dastardly attack, the guilty will not go unpunished," he said.

He also appealed the public to remain calm and maintain peace.

He has also directed the central agencies to extend all possible help to the Andhra Pradesh state authorities in relief operations.

Ahead of his visit, Home Minister Shinde told the media in Delhi that the government had received intelligence about possible attacks in the country but added that it had no specific details about when or which place the attacks might occur.

Financial capital Mumbai and the state of Maharashtra have been put on high alert following the blasts.

Hyderabad city is the host for the Australia India test cricket series starting March 2, 2013. While the Australian team held talks with Indian authorities about its safety, the match is likely to go ahead as scheduled.